In the world bond fund category, a dramatic change has happened: last year’s worst-performing funds are this year’s best-performing ones.

In the world bond fund category1, a dramatic change has happened: last year’s worst-performing funds are this year’s best-performing ones.  This is clear in the chart below, in which we see the performance rank of funds contrasted between 2015 and 2016. 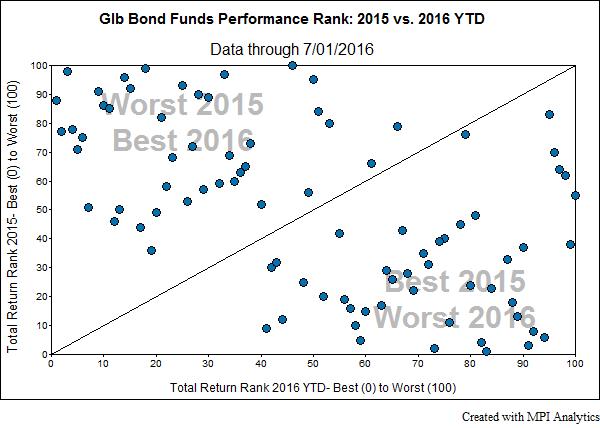 Funds below the line have decreased in rank, while funds above the line have increased.  Naturally, it begs the question as to what is driving this strange movement in relative fund performances.

Currency exposure could be one potential culprit: the dollar strengthened substantially in 2015, which came as a blow to managers who were receiving interest and principal payments in Euros (and who thus began to take in less dollars/Euro). In 2016, the opposite effect occurred, rewarding that same set of managers. 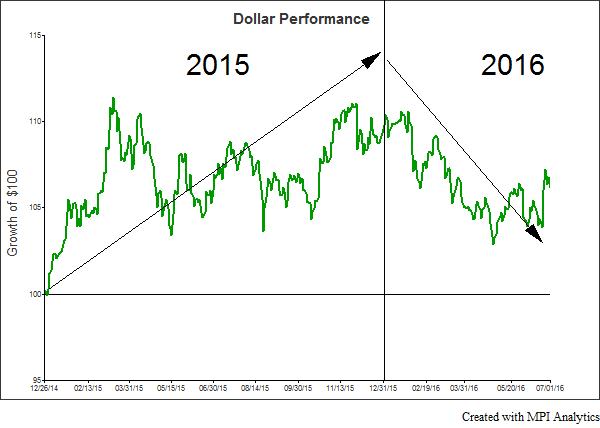 Determining currency exposure of a fund is not an easy task, especially if the fund manager actively manages currency risk. In most cases, looking at thousands of long and short positions in currency forwards, futures and options could provide misleading information about hedging levels. One way to cut through this “mess” is to determine the “implied currency exposure” through the use of a returns-based approach where we are creating a portfolio with dynamic currency hedging that mimics the fund’s performance. We applied this proprietary technique using MPI’s DSA factor model and 18 months of weekly data to the funds in Morningstar’s world bond category. For the chart below, we selected five of the largest managers who showed more than a 20% average currency exposure.  These managers were: 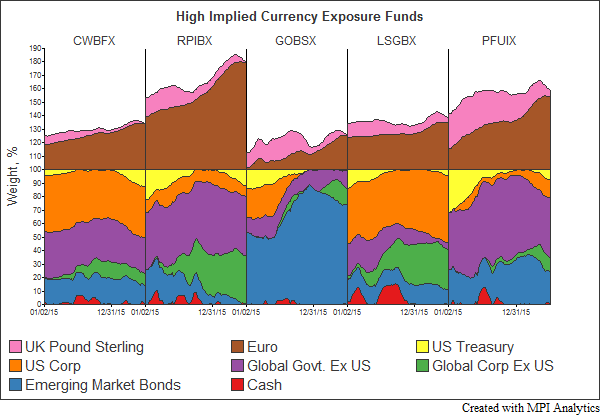 Please note that all funds have increased their currency exposure in 2015-2016. So how did the differences in exposures, specifically in regards to currency, affect the funds’ performance?  The chart below shows the attribution of returns for 2015. 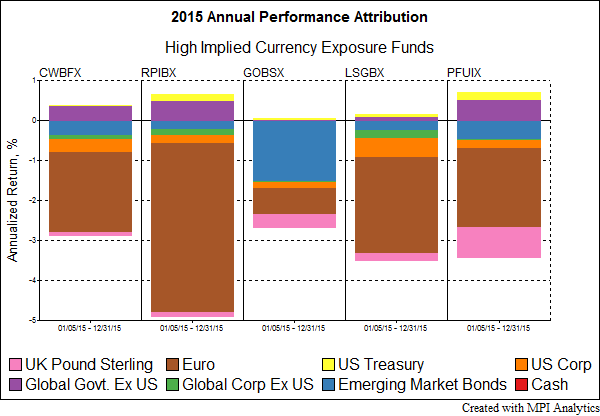 We can see that the Euro and GBP contributed negatively in 2015, leading to poorer performance of these high currency exposure funds.  Any exposure shown below 0 was a net detractor from performance, while any exposure greater than 0 (such as exposures to Treasuries and Global Govt. Ex US) was a net contributor.  Non-dollar currency exposure, however, remains the main differentiator between these funds’ performance.  For the purposes of this research, we did not focus on the idiosyncratic or selection returns of the funds.

The situation reverses itself during the first half of 2016.  High exposure to the Euro has been a significant contributor to the better performance of these funds, leading them to outperform the non-currency exposed funds. 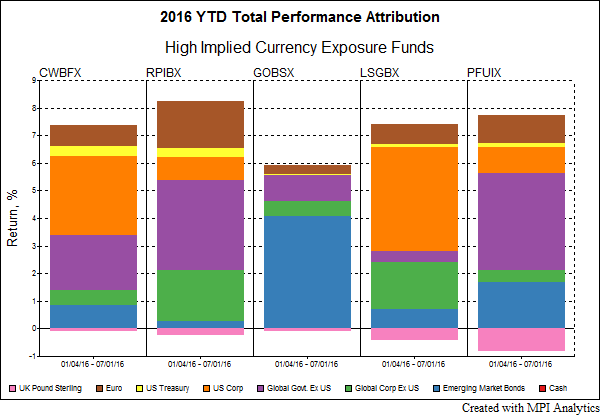 With this information, we can look again at the overall peer group and see how much currency has effected funds as a whole. Any fund with a greater than 20% currency exposure is highlighted in red. 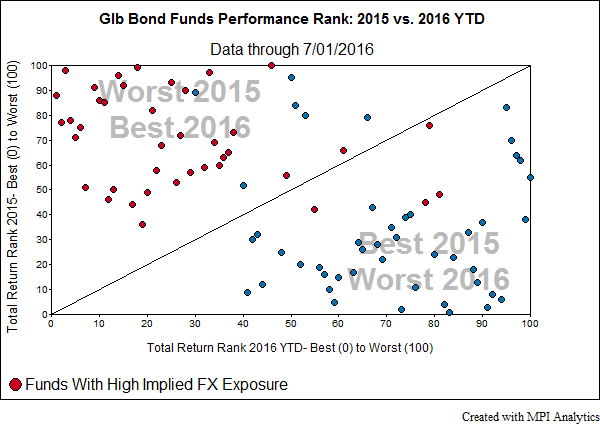 A major event affecting currencies occurred on Thursday, the 23rd of 2016; the vote for the United Kingdom to leave the European Union, otherwise known as the ‘Brexit’.  The referendum’s passage caused losses relative to the dollar, and we can use our exposures to see the effects of these currency movements on world bond funds. 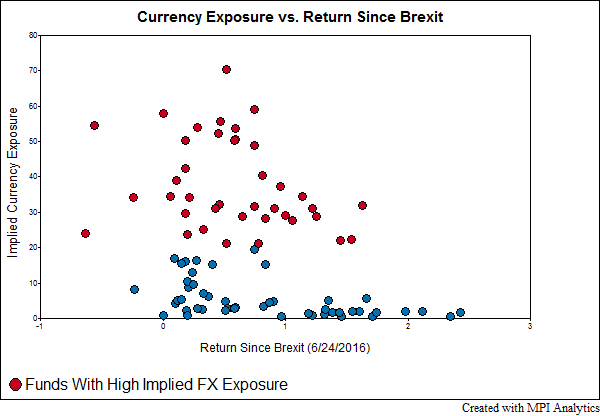 Funds with the highest exposure to currencies lost the most in this fallout, with some managers losing nearly 2% of their value in just three days.

Understanding the currency hedging policies and practices of World Bond managers is important to due-diligence and performance analysis. We can see this in full effect during times of dramatic movements in the values of currency over this 18-month period.  Investors need to be aware of how currency movements can affect the value of their funds and how funds rank against their peers.

DISCLAIMER: MPI conducts returns-based analyses and, beyond any public information, does not claim to know or imply what the actual strategy, positions or holdings of the funds discussed are, nor are we commenting on the quality or merits of the actual investment strategies. This analysis is purely returns-based and does not reflect insights into actual holdings. Deviations between our analysis and the actual holdings and/or management decisions made by funds are expected and inherent in any quantitative risk factor analysis. MPI makes no warranties or guarantees as to the accuracy of this statistical analysis, nor does it take any responsibility for investment decisions made by any parties based on this analysis.