The questions fueling “smart beta” debates carry on, but that hasn’t stopped a number of providers from launching a “smarter” product – and from picking up assets as a result. In this first post of a series, MPI will begin to explore multi-factor smart beta, an up-and-coming take on the strategic beta concept.

Is it alpha or is it beta? Is it smart beta, or is it dumb? Can it be timed, or is that dumb? Is a crash looming? The questions fueling “smart beta” debates carry on, but that hasn’t stopped a number of providers from launching a “smarter” product – and from picking up assets as a result. In this first post of a series, MPI will begin to explore multi-factor smart beta, an up-and-coming take on the strategic beta concept.

In a rare case of general consensus, a major complaint about smart beta products is that while the factor(s) emphasized may exploit anomalies that will continue to be rewarded in the long run, it is by no means the case in the short to mid-term. Any given smart beta strategy will have different associated risks than a cap-weighted index, as well as potentially long periods of underperformance.  Examples include periodic crashes in momentum strategies; value underperforming growth for most of the past decade; small cap stocks generally being more volatile than large cap and tending towards deeper drawdowns; rate sensitivity in low-volatility strategies; and so on.

Enter multi-factor smart beta.  By combining several factors, all of which will (again, presumably) do well in the long term, the shorter-term underperformance of any one or two individual factors can be compensated for by the returns of their better-behaved companions. The usual pitch is that the funds maintain the goal of outperforming the market while offering diversification in terms of both factors and holdings concentration (reducing the dominance of a few mega-cap names).

A number of multi-factor smart beta ETFs are celebrating their one-year anniversaries. Multi-factor smart beta products already span a number of segments, including global stocks, small, mid and large cap stocks, as well as specific sectors and other asset classes.  A comparison encompassing all of these wouldn’t provide a lot of insight, so we created a narrower, more similar group, setting the following criteria1:

The 12 funds produced are shown in the table below along with fundamental data provided in Morningstar US databases.

Although it is by necessity a very, very short period of time – the common period for all funds only dates back to December 3rd, 2015 – the group of funds show a surprising range of results.  The performance figures are shown with return performance for the 6 month period ending June 2nd, 2016 against a backdrop of large cap core actively managed mutual funds3. 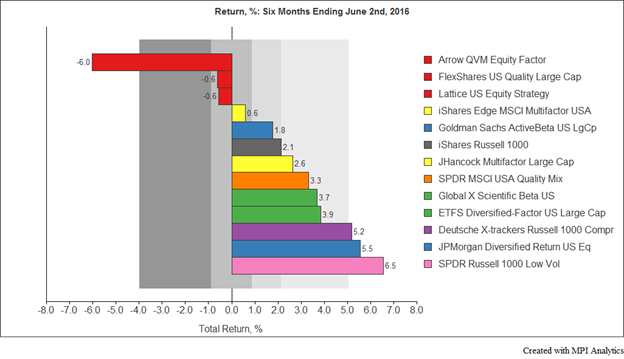 The color groupings represent funds which target the same specific group (1-7) of targeted  factors. Not only is there a broad range in performance in the total group of funds (ranging above and below the 95th and 5th percentile of the active peer group), those with the same nominal exposures do not necessarily appear similar to each other. The visible spread in performance for funds with the same targeted factors indicates that the group dispersion is not wholly a product of the choice of which factors to pursue but also stems from how they are implemented.

Investors should have a clear understanding of the exposures and risks inherent in their portfolios. The premise of these funds is an attractive one at first glance, supported by the assets continuing to pour into smart beta products.  However, a closer look at this group raises more questions than answers, and hints at the potential complexity of the product range. The characteristics of these funds are not as transparent as they could be to either investors or analysts, and are a prime candidate for more in depth analysis, particularly in terms of targeted factors.  In our next post, we will delve into the effective exposures of some of these funds under the objective lens of returns-based style analysis.