Carmignac Gestion’s flagship fund, Carmignac Patrimoine, which grew in size and stature amongst the European investment management community due to sage risk management during the Financial Crisis and stellar long-term performance, faced a difficult 2013 and early 2014. Performing near the bottom of its peers in this window of time, investors questioned whether Patrimoine and […] 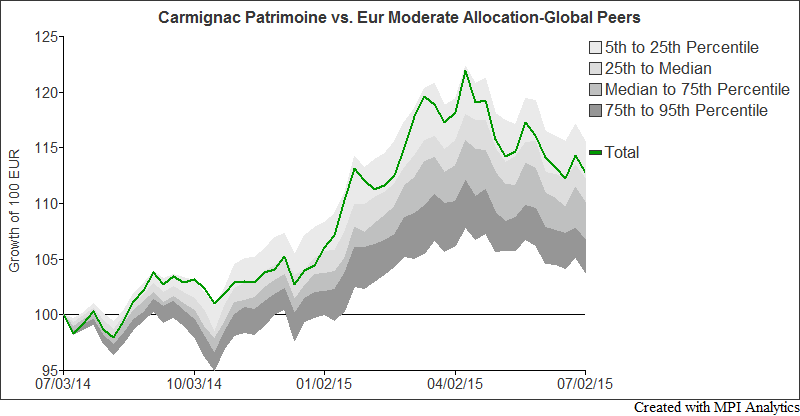 Carmignac Gestion’s flagship fund, Carmignac Patrimoine, which grew in size and stature amongst the European investment management community due to sage risk management during the Financial Crisis and stellar long-term performance, faced a difficult 2013 and early 2014. Performing near the bottom of its peers in this window of time, investors questioned whether Patrimoine and the fund’s management had lost their touch. Outflows ensued. More recently, staff departures led Morningstar to downgrade the fund for the second time in as many years. But are many in the investment community prematurely eulogizing the fund’s glory days because of these short-term challenges?

Following our original analysis of Carmignac Gestion and a more recent update we’ve received considerable client interest in the fund recently and felt it worthwhile to take a pulse check of the French allocation master.

Looking at cumulative performance over the past twelve months in the above chart, it is clear Patrimoine has strongly reclaimed its footing relative to its peers, performing amongst the top quartile, and often at the very top of the pack.1 This is a return to form for a fund that has been dominant across market cycles, illustrated by its top percentile 10-year return amongst the broader Morningstar EUR Moderate Allocation-Global category.

To better understand Patrimoine’s recent performance through a quantitative lens, we performed a returns-based style analysis, comparing the fund’s weekly return stream to a number of market indices in order to assess its effective factor exposures.2 Such analysis helps an investor to gain insight into the fund’s behavior and performance. Being a fund in a category known for broad global mandates with allocations spanning equities, fixed income and other asset classes and instruments, the factor selection process deserves careful attention. Therefore, we assessed Patrimoine’s return stream against the 10 Dow Jones Global equity sector indices in order to see how the equity portion behaves as if it was allocated. For the fixed income segment of the portfolio, we used a series of indices representing distinct fixed income sector choices. We also used the MSCI Emerging Markets Index to proxy exposure broadly to developing markets assets.

Our predictive quantitative model selected a set of 8 factors that define the fund’s recent performance. As seen in the below asset exposure chart over the recent 3-year period, the model currently picks up financials, technology and health care sectors on the equities side; emerging markets; peripheral European sovereign debt, U.S. high yield corporate credit and U.S. Treasuries on the fixed income portion of the portfolio; and cash. 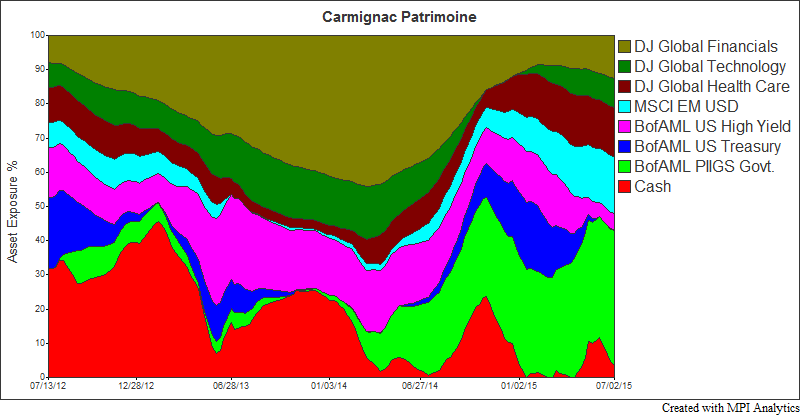 The recent allocation increase to developing markets is notable given that the high profile staff departures of Simon Pickard and Edward Cole (who have since surfaced) contributed to the fund’s second downgrade; Pickard and Cole held responsibility for emerging markets portfolios at the Paris-based manager. (The European equity team, and any allocation in Patrimoine, is also under newer management after Carmignac bid adieu to a team whose performance had flagged, adding to 2013’s woes.)

Reading into the exposures further, one can begin to gain some understanding of the fund’s potential macro views. With relatively significant cyclical equity exposure, growing exposure to credit risk and less cash, the fund appears to be positioned in higher risk assets and sectors presently, readied to take advantage of global growth – wherever it may be found in the current expected slower-growth environment – currency dynamics and (divergent) central bank activity.

To illustrate how Patrimoine’s modeled allocation has behaved relative to peers, we show the below attribution of return sources amongst the equity segment of the fund and its peers. Bucketing the global equity sectors into the three Morningstar classifications – Defensive, Cyclical, and Sensitive – we see that Patrimoine’s performance over the recent 3-year period suggests the fund leans more Cyclical than many of its peers who appear be more moderate in their tilt.3 Over the recent year, the model shows Patrimoine shifting slightly towards Sensitive, though the Cyclical tilt relative to peers is maintained. In this regard, the fund’s equity positioning resides outside the consensus of the peer group, persistently differentiated from the pack.

When analyzing an allocation fund, it is important to look at the sources of return. In the below chart, we attribute Patrimoine’s 3-year total return to its sources. Style represents the return that comes from exposure to the broad macro indices picked up by the model. Selection return represents the unexplained portion. In the case of such an allocation fund, this could be some combination of the following: equity country selection, size/market capitalization bias, duration differences between actual holdings and the fixed income indices, and/or security selection. 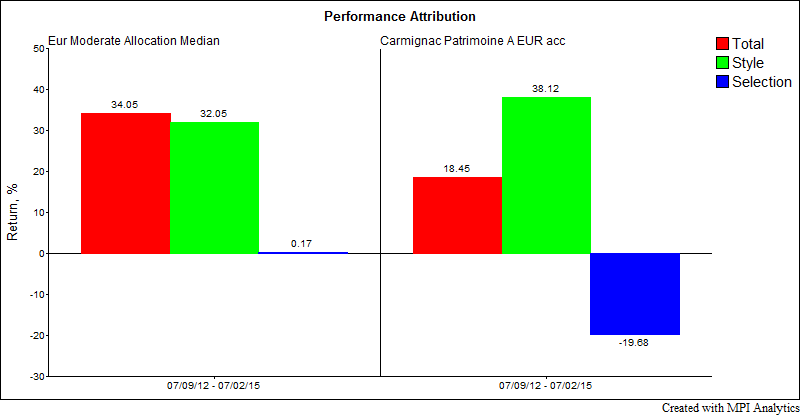 As compared to the peer group median, Patrimoine has returned roughly 6% more over the 3-year period based on its allocation. This indicates that the fund’s long-term strategy has outperformed. Over this window, Patrimoine’s selection return has been negative, and markedly more than the median peer, suggesting that short-term decisions have cost the fund. Illustrating how the picture changes over time, in the recent 12-month period of significant outperformance, Patrimoine’s allocation return is 17.05% compared to the median peer’s 9.83%, 70% greater. Selection, while still negative (-4.27% to the median’s -1.06%), detracts much less from Patrimoine’s performance.

As a diversified allocation fund, investors give Patrimoine a mandate to drive returns by allocating broadly based on macroeconomic conditions and the manager’s resultant investment outlook. To this goal, our analysis shows Patrimoine has been successful against similar funds. Short-term relative underperformance, therefore, is likely due not necessarily to poor allocation and macro decisions, but rather to a variety of factors that are peripheral to the fund’s overall mandate and the longer-term sources of return.

And so we must remember what has come before. Scholars of Marcel Proust’s many-volumed masterpiece, considered amongst the most respected, definitive and emulated modern novel, know it is hard to comprehend a great work’s every detail and how it all fits together. At times our comprehension falters, particularly when the subject matter is complex and esoteric. Edouard Carmignac’s Patrimoine, one of Europe’s largest, most successful and storied mutual funds (dating to 1989) shares similarities with the French novelist’s masterpiece. Fund investors can struggle to find meaning when confronted with challenges, and it can be tempting to draw conclusions based on short-term occurrences at the risk of missing the greater picture and the long-term track record. This is particularly true amongst multi-asset allocators with broad mandates that evade easy benchmarking, which makes looking at peers important. Yet, our quantitative analysis shows that Patrimoine remains a formidable fund and continues to display skill in allocation relative to its peers. Its long-term performance and capital preservation have been stellar, and investors who have exhibited patience have been rewarded handsomely. In light of the recent period of outperformance and performance over market cycles, we think it fair to say that Carmignac Patrimoine’s legacy as one of Europe’s most compelling managers is intact, for now.