by Daniel Li and Alexandre Dussaucy By the end of September, John Paulson’s two flagship funds, the Paulson Advantage and the leveraged Advantage Plus fund, have lost 32% and 45%, respectively, for the year. As these losses loom large, many analyses and commentaries are trying to explain what went wrong. These reports, such as the […]

by Daniel Li and Alexandre Dussaucy

By the end of September, John Paulson’s two flagship funds, the Paulson Advantage and the leveraged Advantage Plus fund, have lost 32% and 45%, respectively, for the year. As these losses loom large, many analyses and commentaries are trying to explain what went wrong. These reports, such as the one published in 15th The New York Times on October 14th, point to concentrated and leveraged positions in Paulson’s portfolios. It’s not clear, though, whether such poor results of the funds are due to specific security bets, focused sector/asset class concentration and leverage, or both. In addition, most reports are either based on insider information or incomplete portfolio holdings1. There seems to be a growing interest in having an objective quantitative analysis verifying these statements.

To detect if some dynamic beta exposures can explain the funds’ past behavior, we performed a returns-based style analysis (RBSA) using only the funds’ monthly returns. Applying MPI’s proprietary Dynamic Style Analysis (DSA) model, we attempted to explain the funds’ last two years of performance with standard sector market indices. The graphs below picture the historical factor exposures of the two funds. R-squared for both funds are at 93%, and predicted R-squared2 close to 85%, indicating very credible analyses. 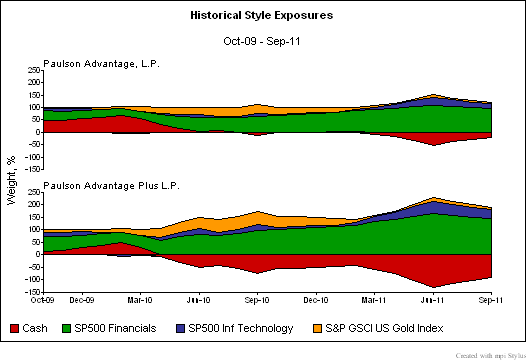 Three observations can be made from the charts above:

The quality of our analysis can also be evaluated by comparing the cumulative performance of the funds (in orange) against their style returns (in purple). These “Style” portfolios are essentially hypothetical and tracking portfolios created from the monthly dynamic weights of the market factors shown in the DSA analysis. The parallel movements of these two indicate that the funds’ performance can be effectively explained by the dynamic beta exposures identified by the model. Given that our replication “style” portfolios have a very simple structure with only four factors – three active market indices and cash (or cash equivalent) – the closeness of tracking is quite remarkable. 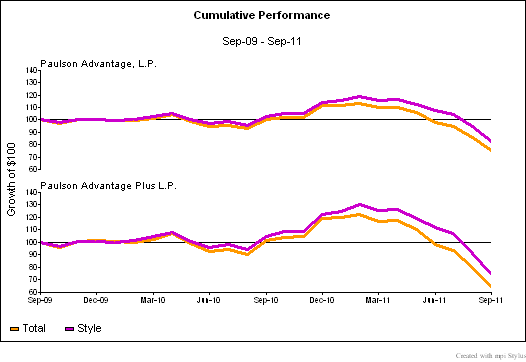 The difference between the fund’s total return and its style return is often called selection return, which could be viewed as a proxy of the manager’s stock selection ability. The performance attribution chart below shows that the main portion of the funds’ negative performance this year could be attributed to their exposure to financials, information technology and gold. The negative selection return could indicate that the investments’ individual stocks underperformed their respective sectors. And while recent media articles focused on the funds’ large positions in Bank of America, Citibank and HP — three stocks that significantly underperformed their sector averages from January to September 2011 – our analysis shows that these specific bets didn’t affect the performance YTD as much as their respective sector exposures. We would like to stress again that our analysis is based on past returns and may not reflect current holdings of the funds. 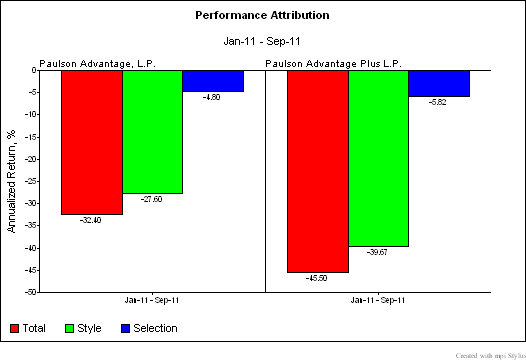 In many cases, fund NAVs and a scant strategy description is the most information an investor can get from a hedge fund. Using Paulson’s Advantage funds analysis as an example, we demonstrate how dynamic returns-based analysis with simple market factors can be utilized in the quantitative assessment of a fund. And while such an analysis is purely quantitative and is not based on fund holdings information, it is remarkable how much information could be uncovered from fund performance data when using precise dynamic analysis techniques.