PTTRX: When is a switch a switch?

With Bill Gross’ surprise departure from Pimco, many investors are looking more closely at the behavior of Pimco Total Return in relation to its peers. Investors and consultants reviewing the new team and near-term performance will be making decisions in the next weeks and months that could have considerable impacts for the future of fixed […]

With Bill Gross’ surprise departure from Pimco, many investors are looking more closely at the behavior of Pimco Total Return in relation to its peers. Investors and consultants reviewing the new team and near-term performance will be making decisions in the next weeks and months that could have considerable impacts for the future of fixed income asset management.

There are numerous considerations that will factor into the decision-making process of any potential changes – from track record to trading costs and tax implications, from depth of bench to manager tenure – but how can investors assess style and risk of peers to Pimco Total Return (PTTRX)?

In addition to fundamental manager due diligence, quantitative analysis holds an important role in addressing these questions and can be of help to investors. In this post, we seek to show how PTTRX appears under a quantitative lens in relation to peers.

We start off by looking at correlations, a common statistical measure of how returns move in relation to one another1. There are a number of actively managed peer funds that are highly correlated to PTTRX. Below we highlight 6 large2 active taxable bond funds displaying correlation over .9 to PTTRX. We include the popular Barclays US Aggregate Bond Index, the typical benchmark for Intermediate-term bond funds3, for additional reference.

Going only this far, there seem to be a number of funds with close returns relationships to PTTRX. But it is not enough to just look at linear relationships (i.e. correlations) when assessing similarity and difference between managers. This is particularly so in the current market and economic climate where significant volatility and wide spreads, have been mostly absent – i.e. returns of fixed income sectors have largely been moving in lockstep due to accommodating monetary policy and positive economic data.

In order to get a better understanding of how these funds differ from PTTRX in credit and duration bets, a comprehensive analysis of the degree of positions overlap in the funds would be a logical next step. For bond funds, however, this is an incredibly difficult task, and with PTTRX would include making sense of many derivative positions in a portfolio of nearly 20,000 holdings, something that few, if any, investors can do (as we’ve noted before). That’s why utilizing performance-based analysis to mimic funds’ performance using market factors is the most logical method. To do so, we ran a quantitative analysis on each fund against a factor map of 7 indices representative of predominant fixed income sectors in the category and the benchmark4.

With quantitative analysis, the funds begin to look less similar. For example, the range of modeled exposure to investment grade corporate credit is very wide, from 39% to 2%, and the range of international bonds from 12% to 0%5.

For greater clarity, we then utilize MPI Common Style, a proprietary statistic that represents the degree of similarity of factor allocation between managers, benchmarks and portfolios. MPI Common Style compares each manager to multiple systematic factors to assess aggregate overlap of these factors.

The below chart displays each fund’s Common Style measure to PTTRX, or the level of style similarity to PTTRX. We again include the benchmark for reference. 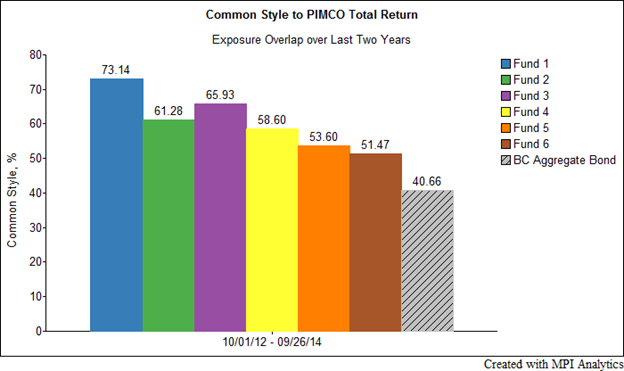 Using MPI Common Style, we see a significant amount of difference in fund exposures relative to PTTRX, which is not evident when looking only at correlations.

Next, we consider risk. The below chart shows weekly Value at Risk (VaR) for each fund over the past 18 months. 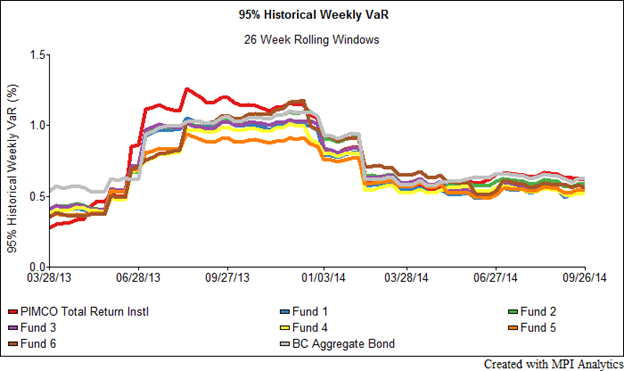 Following a wider band of risk during the Taper Tantrum of 2013, it appears that most funds have recently displayed a relatively similar, and lower, risk profile. The lack of significant market stress and the tighter spreads of the recent period, however, require an additional step to assess potential risk.

To gain a better understanding of risk, we take the current modeled exposures of each fund and conduct a historical stress test by computing their hypothetical performance during the credit crunch of the Financial Crisis. 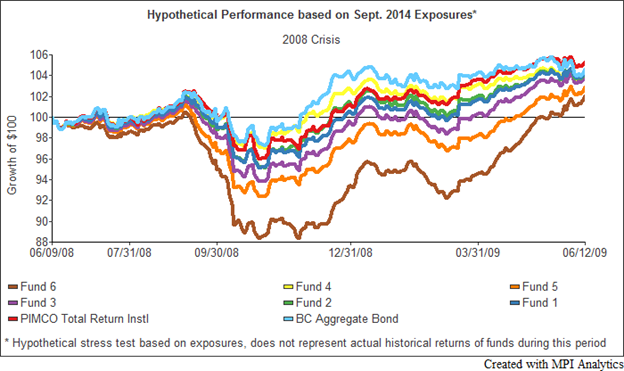 In today’s fixed income markets – and with the competition for migrating assets intensifying – investors (and providers) have to look beyond simple statistical measures to gain a better understanding of style, strategy and risk management.