The Taper at the Beach: Pimco, the Fed and a Quantitative Approach to the World’s Largest Bond Fund

In the WSJ’s February 24th exposé of the turmoil at the helm of Pimco, we saw a curious bit about tension at “the Beach” increasing in the summer of 2013. During this period, according to the Journal, conflict between then co-CIOs Bill Gross and Mohamed E-Erian became apparent to staff, and Gross restricted trading at […]

In the WSJ’s February 24th exposé of the turmoil at the helm of Pimco, we saw a curious bit about tension at “the Beach” increasing in the summer of 2013. During this period, according to the Journal, conflict between then co-CIOs Bill Gross and Mohamed E-Erian became apparent to staff, and Gross restricted trading at the firm.

We wanted to see what insights a quantitative analysis of Pimco Total Return Fund (PTTRX) could offer about the summer and Total Return’s recent performance, a topic of increasing scrutiny amongst the investment community.

To conduct our analysis on Pimco Total Return, MPI analysts ran the fund’s daily net asset values (NAVs) through our proprietary quantitative model to identify the set of factor exposures that best mimic the fund’s return with the highest predictability1. The factors used in this analysis were selected based on their ability to produce the most predictive results. For a fund with over ten thousand positions, this returns-based approach is categorically different than a holdings-based assessment of such a massive portfolio. Our quantitative method is top-down, allowing an investor (armed with sophisticated tools and methods) to see how the fund behaves as a whole on a daily basis, rather than by painstakingly constructing the exact replica portfolio as reported with a lag, a task that few, if any, investors would have resources for if it is possible at all. 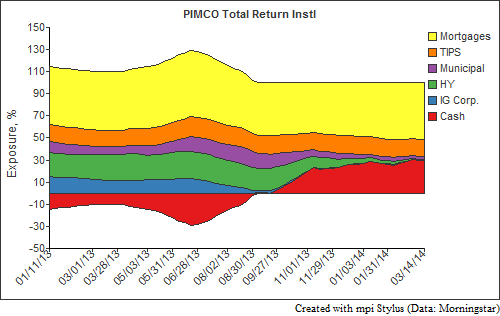 Our analysis indicates that the fund’s returns behaved as though it was short cash and long bonds in 2013, and that the short cash exposure increased during May, peaking in June. Negative cash exposure in the model often represents implicit leverage, which could be the result of either using derivatives or more risky securities than the ones chosen for this analysis. The model also shows the fund to have long bond exposure, around 130%. In a historical context, however, this should not be a surprise, either to those looking at public statements and reported holdings or using returns-based models. Indeed, PTTRX has behaved as if it were levered at greater levels in recent years.

The portfolio’s exposure had negative consequences on performance in the summer of 2013, and beyond (more later, and in below charts). On May 22nd, in testimony to Congress, then Fed Chairman Bernanke suggested the central bank could begin to taper purchases of mortgage securities and U.S. Treasuries in coming months under its Quantitative Easing program. Through the summer months following this announcement, volatility and a market sell-off in many fixed income classes resulted in increased yields, and, conversely, decreased prices. Long factor exposures that the analysis detects, including TIPS and mortgages, suffered during this period. The fund behaves as if it curtails the short cash/leveraged bonds position by the end of September.

When looking at performance attribution from the beginning of May 2013 through March 14th 2014, mortgages as an asset class recovered, more or less, but not TIPS. TIPS appear to be the factor that had the biggest drag on performance, though the model shows the exposure level to remain largely unchanged through the period. Additionally, while high yield bonds have performed comparatively well, the portfolio behaves as if exposure to this asset class was pared, thus limiting Total Return’s upside. While the short cash/interest rate risk exposure looks to be reined in after the June peak (a month when the WSJ reported $9.6B in outflows from Total Return), the portfolio’s composition to date has not turned out to be optimally positioned for performance improvement. (see charts below) 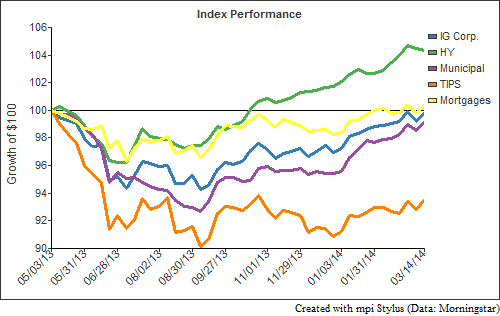 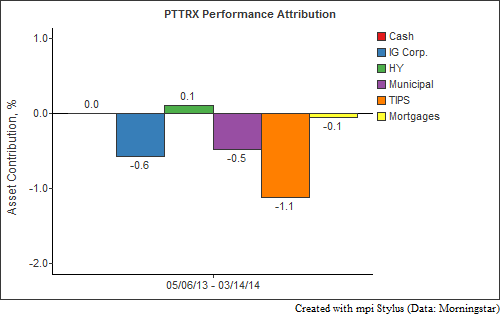 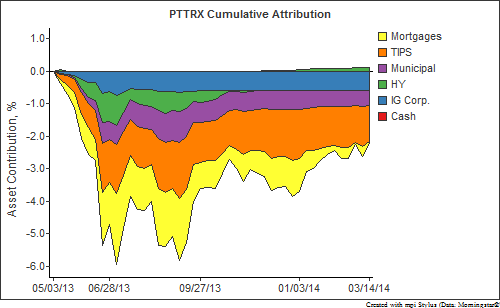 To put this in perspective over this short term, Gross’ Southern California neighbor Jeffrey Gundlach’s DoubleLine Total Return Bond Fund behaves like it had significant exposure to cash going into the turmoil following the first “taper talk”. While the model shows their mortgage strategy to be more elaborate than what we see with PTTRX, with a number of asset classes picked up, including PO/Inverse Floaters and CMOs, their cash exposure trends down and perceived exposures to mortgages and distressed debt increase through the back half of the year. Performance-wise, this turned out to be to their advantage; they’re up 1.9% over the past 12 months through March 14th. PTTRX remains down .20% over the period, lagging behind it’s intermediate term index, Barclays U.S. Aggregate Bond Index, up .56%, and its average peer in the intermediate term bond fund category, up .72%, according to Morningstar and as reported by the WSJ’s Daisy Maxey. 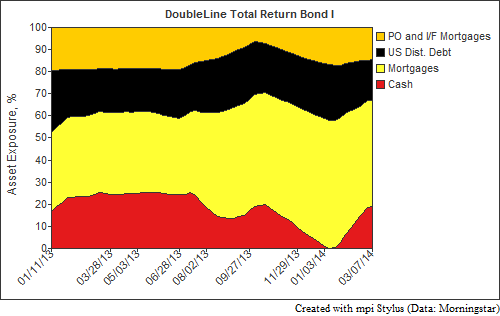 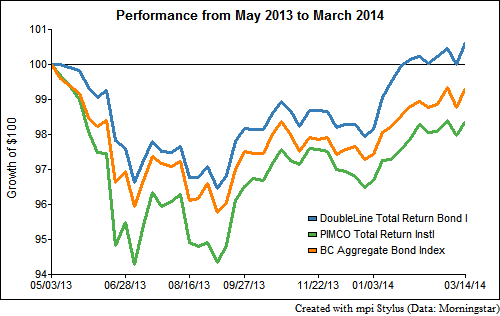 This analysis is performed in hindsight over a short time horizon that has been under a magnifying glass. While leverage in such a large fund, and whatever its origin, could be reason for some concern (and a challenge for the industry to address), it was not a significant loss and should not detract from the manager’s longer term track record, which is one of the best in the industry.

For investors keen to take greater oversight of their fixed income portfolios, however, especially in light of Fed action and resultant market impact, this instance can serve as a call to action to institute quantitative monitoring on a regular basis to better understand their manager’s thinking, short term bets and potential risks incurred in a portfolio. We have seen an uptick in interest from clients looking to conduct reviews and analysis of fixed income portfolios, particularly alternative bond funds, and we look forward to continuing the discussion here.