Can Annual Returns Be Used to Unlock the Sources of Top Endowment Performance?

A Sneak Peek of MPI’s Endowment Study. Fall has brought with it excitement and some surprise in a much-watched annual contest. No, we’re not talking about the World Series but rather endowment-reporting season. Fiscal year (FY) 2015 returns are now in from many of the top college endowments. Bowdoin, with almost $1.4B AUM, has taken top […]

Fall has brought with it excitement and some surprise in a much-watched annual contest. No, we’re not talking about the World Series but rather endowment-reporting season. Fiscal year (FY) 2015 returns1 are now in from many of the top college endowments. Bowdoin, with almost $1.4B AUM, has taken top honors thus far (14.4%). Harvard – the largest endowment – turned in a 5.8% return.  In this post we will analyze the top endowment funds using MPI’s patented Dynamic Style Analysis (“DSA”) model, which has become a solution for investors assessing complex funds and those with limited data disclosures (e.g., hedge funds).  This analysis provides insight into these top endowments that cannot be achieved using other methods and suggests reasons for the range of performance outcomes they report.

Disclosures from endowments are minimal, typically consisting of annual performance figures, updates to policy portfolios (target allocations to specified asset classes and/or factors) and general commentary.  Endowments often have conservative media policies as the interests of the institution in growing and preserving such primary funding sources don’t align with full transparency of investment activities. Even many institutional consultants struggle to explain top-tier endowment results. Although many papers and books have been written on the endowment model for investing by gurus like Yale CIO David Swensen, those seeking to understand tactical allocation shifts, strategy preferences, and manager selection are given little to work with on an ongoing basis.  The endowment world remains shrouded in opacity and most takeaways amount to little more than supposition.

When only annual performance figures are reported, a decade’s worth of performance is represented by 10 data points.  Traditional static and rolling window methods of regression analysis struggle to find credible insights from such infrequent data.  MPI’s Dynamic Style Analysis, however, is uniquely able to work with such limited data. DSA improves upon Sharpe’s original RBSA approach and, using factors indicative of the asset classes reported by endowments, provides significant insights into their behavior. DSA is able to explain changes in an endowment’s performance over time and to highlight differences across endowments using a common analytical framework.

The set of regression factors or “factor map” used in our analysis2 is comprised of the following indices corresponding to a generalized set of endowment exposures:

Below are the dynamic factor exposures captured by DSA over the past decade (using annual returns from July 2005-June 2015) in some of the largest and/or top-performing endowments: 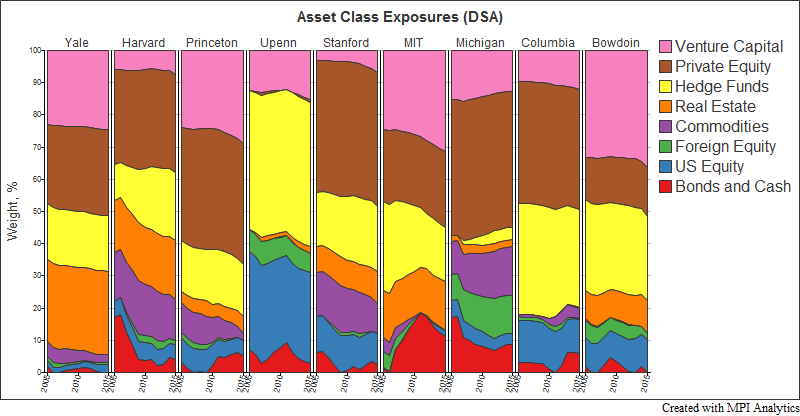 The exposures captured by DSA should not be interpreted as the actual positions  of the endowments, but rather how the endowments’ behavior is best explained by our chosen factors given their reported annual performance.4

Some notable observations that are corroborated by a review of annual reports:

In the below chart, we show cumulative performance of each endowment portfolio (blue) vs. its reconstructed dynamic “Style” or beta-tracking portfolio made up of generic indices (yellow), as seen above. 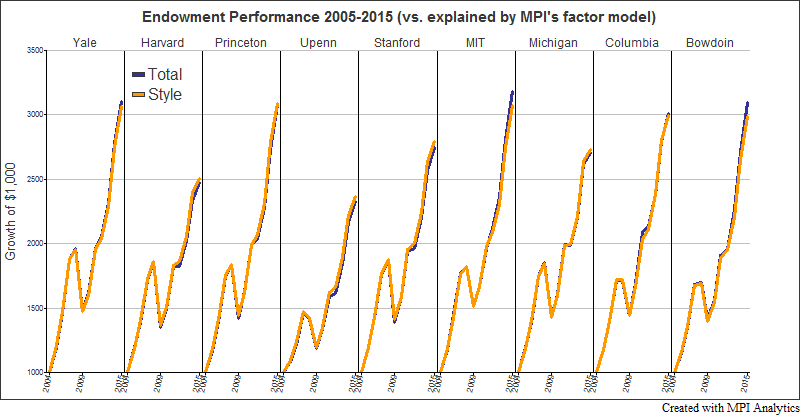 Given the high degree to which the style portfolios track actual returns, this quantitative study supports that, like public pensions (Brinson, et al), asset allocation explains a dominant portion of endowment return movements, both in magnitude and variability. For most of the endowments in our study, the analyses produced Predicted R-squared values in the 80-90% range. Predicted R-squared is MPI’s proprietary measure of the model’s ability to predict future returns; these remarkably high values indicate that our analysis has a lot of predictive power and is not just a historic data fitting exercise. 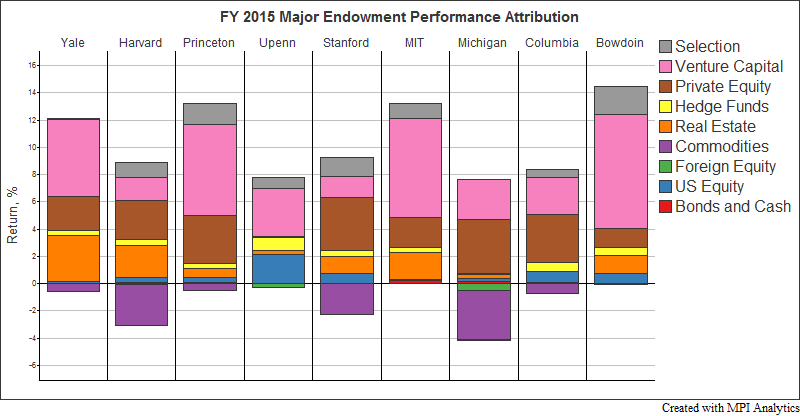 Performance is generally well explained (R2 in 90-95% range) for each endowment by its corresponding  dynamic factor exposures over the ten year period. The attribution chart above breaks down FY 2015 performance into components attributed to the various factors used in our analysis, as well as the unexplained portion of the regression which is referred to here as “Selection”:

Our study confirms that top-performing endowments’ results over the past decade can be explained by significant investments in non-public equity, real estate and hedge funds. We also find a considerable dispersion of allocations: from more traditional exposures, like UPenn, to more aggressive exposure levels to alternative investments as is the case with Bowdoin.  Looking at shorter timeframes, however, significant selection return clearly raised Bowdoin, Princeton and MIT past their peers in the recent fiscal year.

With advanced quantitative techniques, such as MPI’s DSA, we see that meaningful insights can be gained even when returns data are infrequent, providing analysts and investors a method to reconcile performance with sparse position disclosures. MPI will continue to investigate these and other opaque investments to provide insights about drivers of performance.