The returns of endowments can be attributed to two fundamental components: asset allocation and security selection. Asset allocation is what a factor model is generally able to explain, shown in terms of factor exposures.

With the first two Ivy League endowments turning in their fiscal year 2017 returns, we’re providing a snapshot to compare how Harvard and Dartmouth did relative to each other using our patented Dynamic Style Analysis (DSA) model. DSA is an enhanced (returns-based) quantitative analysis model that provides a more transparent view of opaque or complex investment strategies, funds and products.1

The returns of endowments can be attributed to two fundamental components: asset allocation and security selection. Asset allocation is what a factor model is generally able to explain, shown in terms of factor exposures. Security selection is determined by the performance of securities selected by the managers that the endowments invest in. One thing to note: since the endowment fund returns we use in our analysis are net of fees, negative selection can arise due to fees that the endowments pay to their managers.

With that in mind, the most interesting observation in comparing Harvard―which returned 8.1 percent for the 2017 fiscal year―to Dartmouth―which returned 14.6 percent―is that, absent the impact of selection return (represented by the blue bars in the below chart), their performance should have been on par with each other, indicating that neither endowment owned a clear asset exposure advantage. 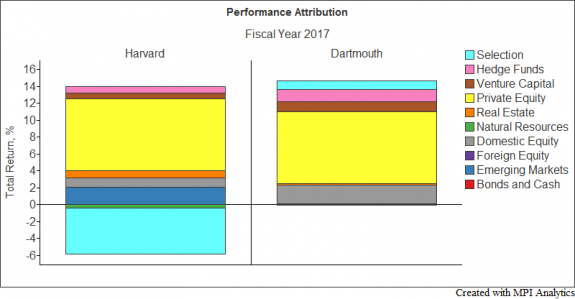 In his 2017 fiscal year letter, Narv Narvekar, CEO of Harvard Management Company, pointed to a number of internal changes enacted during the year, which included markdowns of natural resources; unloading private equity, venture capital and real estate funds in the secondary market; and increased allocations to external managers.

The recent changes at Harvard seem to be the driving force behind what the data show, since Harvard and Dartmouth have historically tracked very closely against their respective factor mimicking portfolios (see below chart). Given this, one could view Harvard’s 2017 performance as an anomaly that should go away once changes under the leadership of Mr. Narvekar are fully implemented. 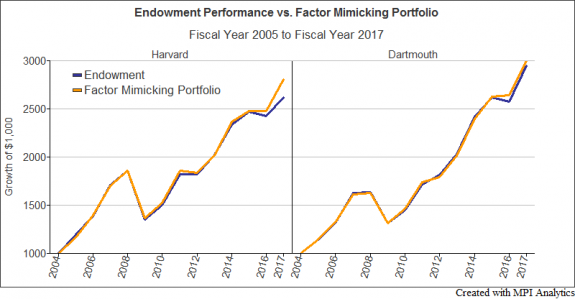