Measuring the Ivy 2017: A Year in the Upside Down for Endowment Returns

In stark contrast to FY 2016, this past year was a strong one for most endowments. In fact, nearly all the Ivy League endowments, Harvard being the only exception, beat the 60-40 portfolio, a commonly cited benchmark that endowments measure their performance against. 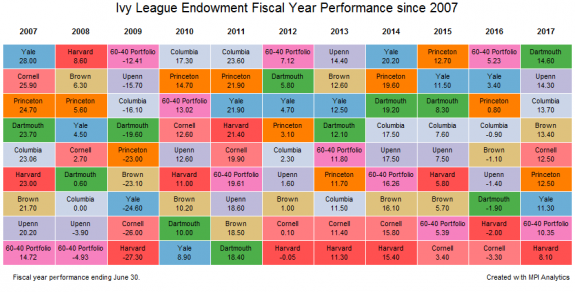 As of July 2017, the total AUM among the Ivy League endowments was $125.56 billion, representing 24.38% of the assets held by universities and related endowments 1. While final numbers for fiscal year 2017 are still pending, here is a look at how 2016 AUM was distributed across the Ivies.

In stark contrast to FY 2016, this past year was a strong one for most endowments. In fact, nearly all the Ivy League endowments, Harvard being the only exception, beat the 60-40 portfolio, a commonly cited benchmark that endowments measure their performance against. Only Columbia and Princeton have beaten the 60-40, on average, over the past 10 years.

All endowments managed returns well above their historical payouts of 5%, even after adding 1.65% inflation. Dartmouth, with a return of 14.60%, beat the rest of its Ivy peers, continuing its fairly consistent trend of ranking among top Ivy performers. In fact, only Yale has performed as well as Dartmouth has during the last five years. University of Pennsylvania (UPenn) reversed course this year, ranking a close second with 14.30% returns. And Harvard continues its six-year trend of performing at or near the bottom of the class with 8.10% returns in FY 2017. Yale, which has landed in the top three every year since 2011, delivered mediocre returns this year, relative to its peers, at 11.30%. 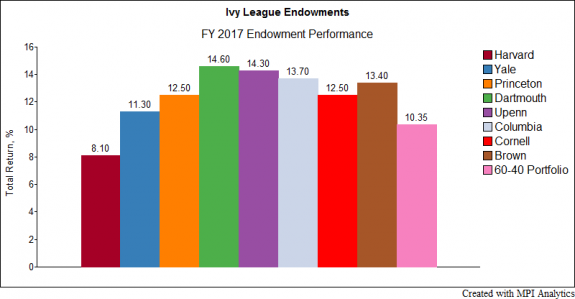 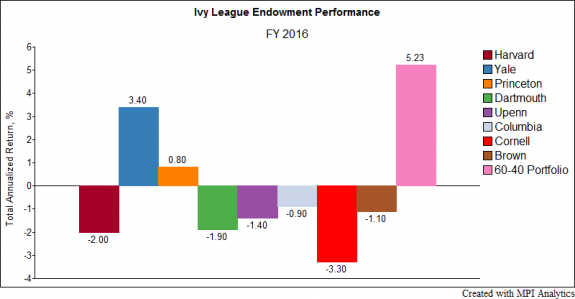 By most measures, however, FY 2017 was an unusual year. In fact, Ivy endowments that have historically under-performed  their peer group outperformed this year, with Brown and Cornell being the most notable examples. Both endowments beat perennial juggernauts, Yale and Princeton, this year, a feat we’ve only seen once since 2011. Much of this year’s outperformance can be attributed to larger exposure to public equities, which have seen a remarkable rise since Q4 2016. 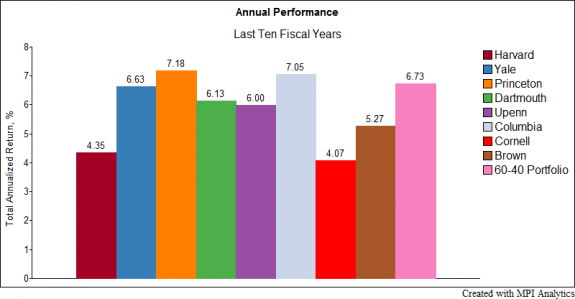 To capture exposures, we analyze each endowment return time series using a common factor set across all endowments, so that we ensure an apples-to-apples comparison. This enables us to create a factor-mimicking portfolio for each endowment that can provide further performance insight. Table 1 displays the factors we used to represent each of the asset classes found in the Ivy League endowment portfolios.

The analysis was conducted using our proprietary Dynamic Style Analysis (DSA) model. DSA is an enhanced (returns-based) quantitative analysis model that provides a more transparent view of opaque or complex investment strategies, funds and products.3 Through this model, we compared the returns of the endowments since 2005 to the factors shown in Table 1. The chart displays the asset class exposures obtained for all Ivy League endowments over the past 10 years. 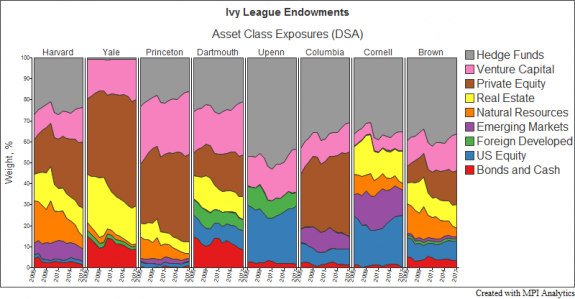 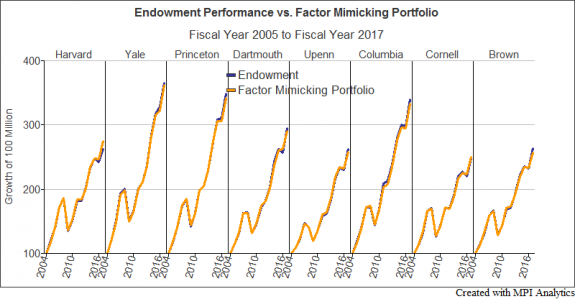 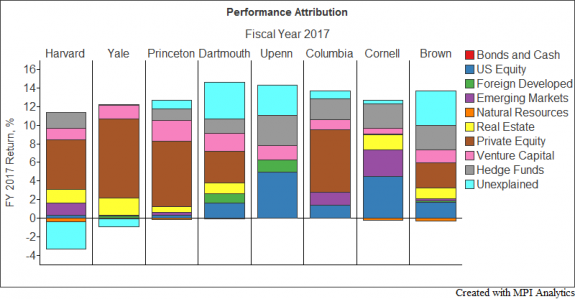 Looking at the differences in performance in the underlying asset classes and considering the exposure of endowments to these asset classes, it’s easy to see why the performance of FY 2017 was so different from FY 2016: markets, in general, performed well over the last 12 months. 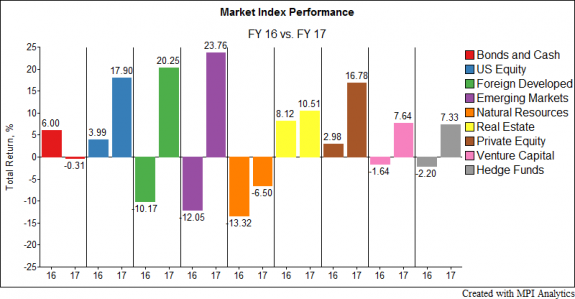 In fact, all asset classes, except for Bonds and Cash, performed significantly better during FY 2017 than they did in FY 2016. The largest magnitude of difference can be seen in foreign equities. Developed Foreign Equities returned 30.42% more in FY 2017 than in FY 2016, and Emerging Markets returned 35.81% more.4 Yale shows the lowest exposure to these asset classes; with Dartmouth, UPenn and Columbia (the three highest performing endowments) showing the highest exposure.

Clearly, our factor model is not expected to capture 100% of endowment returns variation. And while its explanatory power is high, as we noted in our previous studies and as evidenced by the cumulative growth chart above, we observe some unexplained returns every year. These unexplained returns could be due to security, sector, country, style and strategy bets by underlying managers for marketable securities as well as valuation fluctuations and adjustments for private investments.

Unexplained returns were mostly positive this year, with the exception of Harvard and Yale, hinting5 at the ability by the funds to earn abnormal returns over and above their asset allocations. Harvard, in particular, stands out with a negative -2.9% unexplained return after final analysis. In his 2017 fiscal year letter, Narv Narvekar, CEO of Harvard Management Company, pointed to a number of internal changes enacted during the year. Those included markdowns of Natural Resources; unloading of Private Equity, Venture Capital and Real Estate funds in the secondary market; and increased allocations to external managers.

It is important to note that markdowns that affect the performance of the endowment, which are not related to market performance, are captured as a negative unexplained return. It is also important to note that the large positive selection returns by other endowments this year could be a source of concern for the future, especially if related to similar adjustments to the values of illiquid investments.

The Yale model, pioneered by David Swensen, the manager of the Yale endowment, has swept through the endowment world. This model calls for increased investment in illiquid and higher risk assets in order to harvest the illiquidity premium. These investment properties are more easily sustained by endowments due to their having a larger asset base and a longer time frame than most institutional investors. Using our portfolios of exposure, we can see how investment portfolios have changed over time, especially focusing on illiquid private investments. 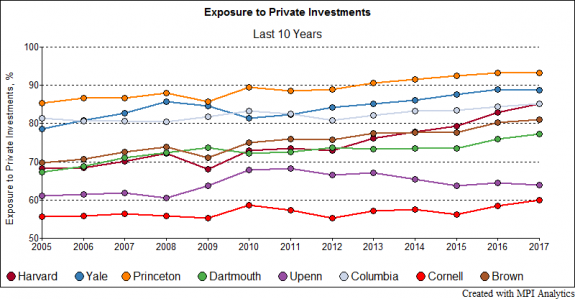