Making the Mark: How Global Equity Hedge Funds Have Beat the Market

Whether rightly or wrongly, hedge funds are often compared to market beta as an indicator of their worth, and their (expensive) fee structure. With 2015 figures now in, the average hedge fund, as measured by HFRI Composite, has trailed the S&P 500 for seven straight years in the wake of the Global Financial Crisis. Source: […]

Whether rightly or wrongly1, hedge funds are often compared to market beta as an indicator of their worth, and their (expensive) fee structure. With 2015 figures now in, the average hedge fund, as measured by HFRI Composite, has trailed the S&P 500 for seven straight years in the wake of the Global Financial Crisis. 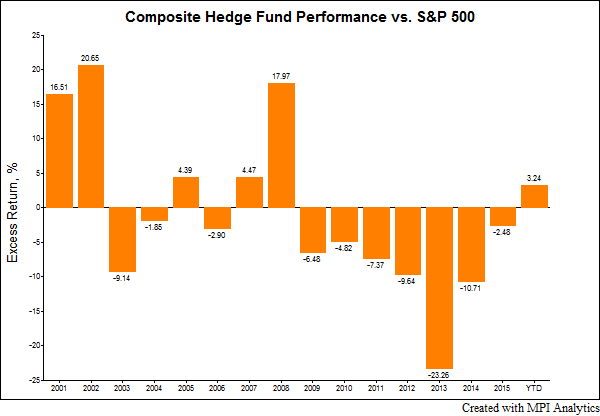 This is all well and good, but hedge funds vary widely in their investment mandates and strategies; thus, comparing the average of this still-growing universe to a single equity market isn’t going to be appropriate for some of the funds involved.

Some hedge fund groups show evidence of adding value when compared to an appropriate benchmark using refined analytical tools. We identified hedge funds that focus on making directional bets on global equities and created two groups based on their assets under management (AUM). These two groups have out-performed the MSCI World Index, an equity benchmark that is broader and more consistent with their mandates than the S&P500. The chart below shows the directional global equity hedge managers2 by size3 against this index: 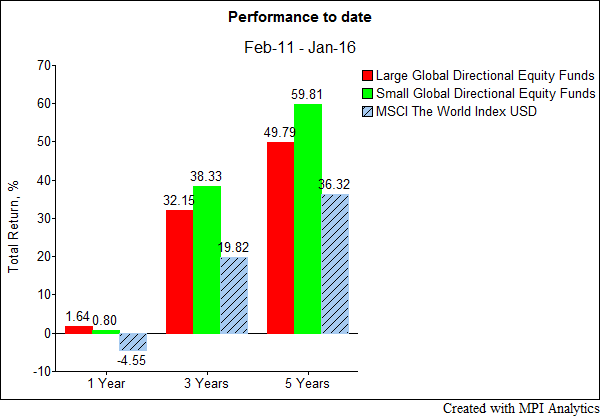 As we see in the above chart, across the past 1-yr, 3-yr and 5-yr periods, the average fund in this segment adds value even after fees are accounted for. While large funds beat their small peers in the past year, over the recent 3-yr and 5-yr period, we see a return premium to funds that remained under a half billion dollars in AUM.

The higher return of both groups, however, isn’t the product of just adding more risk. On a risk-adjusted basis, the average global equity hedge fund, regardless of size, delivers this outperformance with significantly less risk per unit of return. Sharpe ratios for the past 5-yr period appear in the below chart. 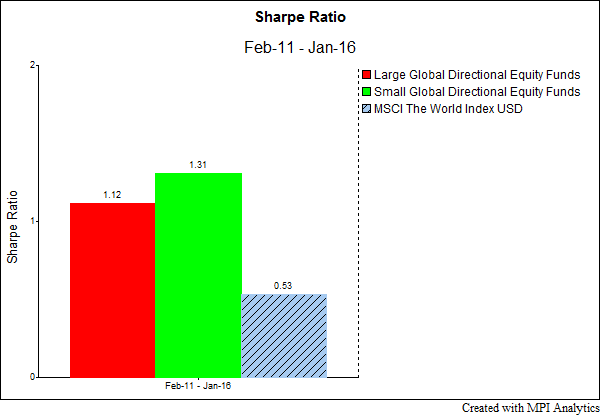 Diving deeper, we ask, “What are the sources of these directional funds’ returns? How have these managers, on average, beat the market?” To answer these questions, we conducted a quantitative, returns-based analysis of the average Large and Small funds, regressing each group’s return against global equity sectors4 and cash. This results in portfolios of the most influential exposures with the highest predictive power that best explain each groups’ performance5, shown below. 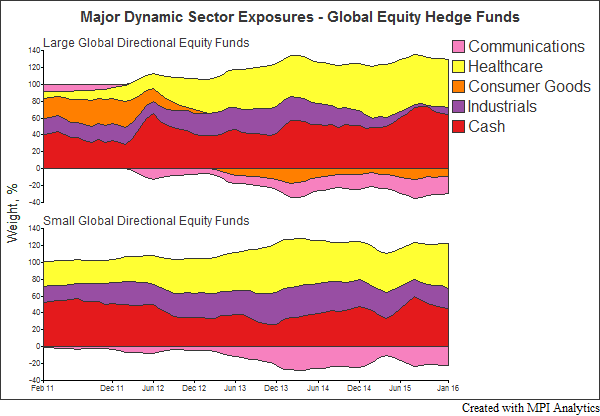 We see that one of the sectors with the highest exposure in the funds in both groups is Healthcare, which has been the highest performing sector in the most recent 5-yr period (see below chart of annualized sector performance). In both groups, we notice spikes in funds’ cash exposures, which suggests managers actively reduced risk during recent market turmoil. 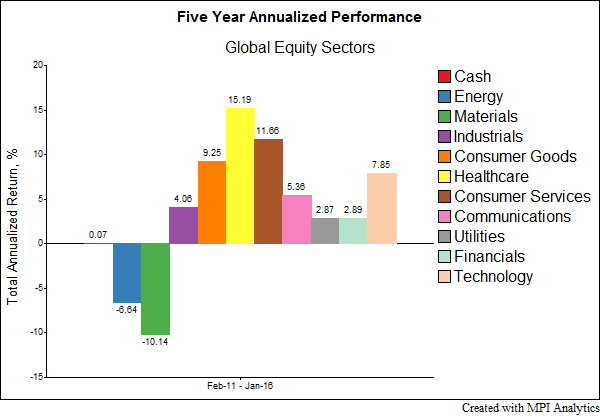 From a returns-based performance attribution standpoint, we see that – with the exception of large funds over the past year – stock selection return delivers the majority of the outperformance over the various time periods relative to market timing return. Selection return is the portion of the groups’ return that we are unable to attribute to market exposures (i.e., sector betas)6, timing (or allocation) return is the difference in return between the groups’ dynamic factor exposures and the dynamic factor exposures of the MSCI World Index.

Performance attribution of the average Large and Small fund’s outperformance is below. 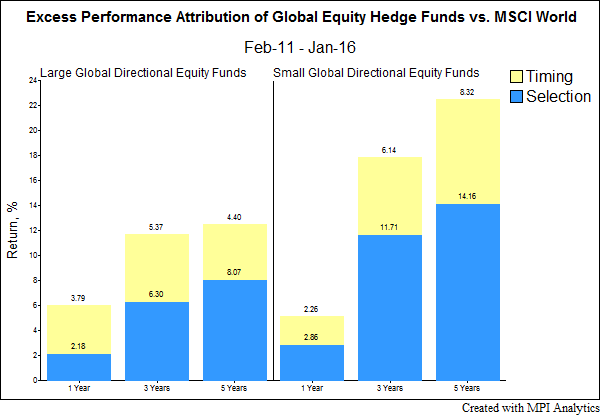 Despite continued criticism, some of which is warranted, we see evidence of both strong stock selection and skillful market timing displayed by the average manager profiled in this study of directional global equity hedge funds.

Hedge funds can expect an unwavering spotlight, with high hurdles for performance and plenty of skepticism along the way.

They can continue to prove their worth to investors by (consistently) delivering risk-adjusted returns with such skillful active management. In a growing (or swollen, depending on your stance) industry with increasing competition for alpha, the fate of thousands of funds rests on their managers’ ability to do so.