Continuing our exploration into the smart beta segment (Part 1, Part 2), in this third post we introduce a simple “IQ Test” that can help investors and managers measure the “smartness” of the increasing number of non-cap-weight rules-based products on the market.

Continuing our exploration into the smart beta segment (Part 1, Part 2), in this third post we introduce a simple “IQ Test” that can help investors and managers measure the “smartness” of the increasing number of non-cap-weight rules-based products on the market.

There are numerous arguments in circulation saying that smart beta in general isn’t particularly smart.  A prominent one, co-authored by Research Affiliate’s Rob Arnott, says a monkey can do it. The claim goes that portfolios whose construction successfully decouples price from weight tend to outperform their cap-weight counterparts over time.  The next point the authors make is that this is primarily due to (small) size and value biases inherent in these indices, as well as a benefit from rebalancing.  In fact, these characteristics have also been observed in  randomly generated portfolios – the practical equivalent of Malkiel’s monkey throwing darts at the stock pages.

Refuting this argument, researchers at EDHEC find that a diverse sample of smart beta strategies are exposed to various factors of different magnitudes and that the characteristics observed in the prior study are most common with strategies that tend towards equal-weighting, or a monkey portfolio.

A third perspective from S&P begins with same idea, that an equal-weight index has the same expected return as a random (monkey) portfolio; that being the average stock return.  They further argue that for both smart beta strategies and active managers who significantly deviate from cap-weighting, equal-weighting is a logical and more meaningful benchmark.

For investors seeking an intuitive way to assess the degree to which a smart beta portfolio deviates from cap-weighting, or in other words its degree of “monkey-ness”, Returns-Based Style Analysis  can be used to mimic a portfolio’s behavior by using a simple combination of cap-weight and equal-weight indices.  Thus, we can assess just how distinct the weighting schemes and results of various smart beta portfolios are. For products promoting a unique way of weighting securities to target various factors with aims of outperforming the market, such a test can be enlightening.

To illustrate, we use both equal-weight and traditional cap-weight versions of the Russell 1000 Value and Growth indices to analyze a handful of large-cap ETFs that use alternative weighting, as well as both cap-weight and equal-weight benchmarks, and plot the results in the Style vs. Weight map below1. 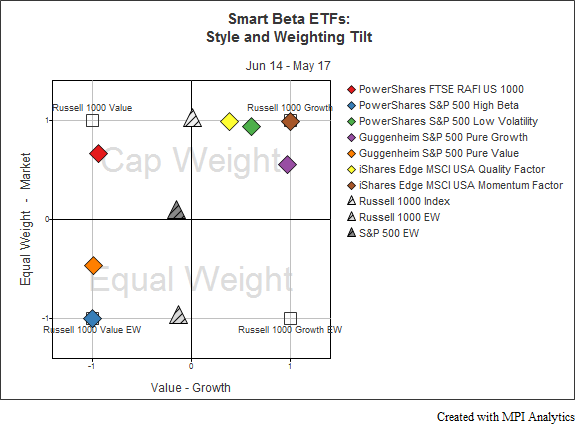 By placing cap-weight indices in the value and growth “corners” on the top and their equal-weight counterparts on the bottom we create a natural “weight dimension” along the Y-axis: funds closer to the top exhibit behavior similar to the market cap-weight, while the ones down below behave as if they were equal-weight.

Moving to the ETFs, the often-noted value bias of fundamental indexing is apparent in the PowerShares FTSE RAFI US 1000 ETF’s (PRF) location on the Value side of the Value-Growth axis.  We can also see that, over this time period, this ETF behaves as a roughly 80/20 combination of market cap- and equal-weight Russell 1000 Value indices, respectively. It’s worth noting that this proportion varies over time, especially during the financial crisis.

Two ETFs appear at opposite extremes: the Powershares S&P 500 High Beta ETF (SPHB) plots as entirely Equal-Weight Value, while the iShares Edge MSCI USA Momentum Factor ETF (MTUM) plots as entirely Cap-Weight Growth.  Both portfolios are concentrated in certain sectors, primarily in terms of Financials for the former and IT for the latter – helping to explain their Value/Growth positioning.

The Guggenheim S&P Pure Value ETF (RPV) and Guggenheim S&P Pure Growth ETF (RPG) both show the expected style exposures. RPV reflects a strong tendency towards Equal-Weight, meshing with the suggestion of the S&P paper.  The proportion of Equal-Weight Growth in RPG is significantly lower, about a quarter of the portfolio, possibly due to sector orientation and the proportion of IT components.

The final two ETFs appear to be almost entirely cap-weighted.  For the iShares MSCI Edge Quality Factor ETF (QUAL), this may be due primarily to its modified cap-weight approach.  The PowerShares S&P 500 Low Volatility ETF (SPLV), however, is approximately 100 securities weighted by inverse volatility, with a result that is pretty close to equal-weight; most of its holdings are fairly close to 1% in weight.  Its cap-weight location on the graph, therefore, can be explained by the nature of the “factor” being exploited.  The least volatile securities tend to be the largest by market cap.  Neither exhibits the behavior one would expect of a random portfolio.

Any investment product can be viewed through multiple lenses, each of which may provide different insights or information.  An Equal-Weighted portfolio is the ultimate naïve portfolio, and possesses certain characteristics which may be shared with other alternative weighing schemes.  The extent to which a smart beta strategy breaks from cap-weighting can be an important factor in explaining its performance.   We find that by simply overlaying market cap-weight and equal-weight indices in a returns-based analysis,  a lot of the “alternative weighting” within popular smart beta products is rather easily decomposed, with the resulting exposures perhaps not as distinct as they may seem from marketing.

This approach can be used to monitor smart beta investment portfolios over time, especially during products’ underlying indices’ reconstitution and rebalance periods and at times when fundamentals and prices move dramatically. For autopilot, rule-based ETFs, such restructuring and market events can lead to equally dramatic changes in the weights of underlying components – which we will cover in a subsequent post.