Galleon Technology Fund: A Clipper Or A Barge?

The goal of this weeks post is to explore the factors driving Galleon Technology fund’s performance a bit deeper. The fund was widely known for its high turnover, rapid-fire trading and extensive use of options to leverage short-term bets. Therefore, it seems unlikely that this quintessential hedge fund could resemble a typical technology sector mutual […]

The goal of this weeks post is to explore the factors driving Galleon Technology fund’s performance a bit deeper. The fund was widely known for its high turnover, rapid-fire trading and extensive use of options to leverage short-term bets. Therefore, it seems unlikely that this quintessential hedge fund could resemble a typical technology sector mutual fund. But, as we’ve already learned from our previous analysis of Renaissance RIEF, such massive trading may inadvertently result in performance that can be explained by a handful of directional bets.

First, we expanded the time period from our previous post. The chart below now includes excess return information for five full years from 2004 where we’ve highlighted three months: July’07 and ’08, which have come under heavy scrutiny for alleged insider trading and July ’06, where outperformance was notably higher than both July ’07 and July ’08. Over the five year period (2004-2008) these three months were the only months when the Galleon fund significantly outperformed its peers-an average technology hedge fund in the index. 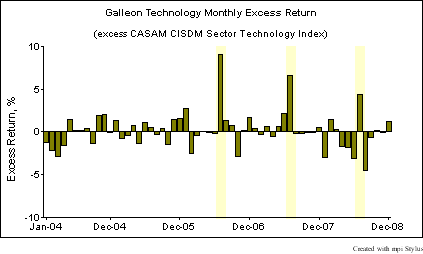 Clearly, July performance numbers for each of the three years are deemed as statistical outliers (regardless of the legal connotation) which potentially could distort any further analysis of Galleon returns. In addition, the complaint mentions July 2007 $4M gain from trading Hilton—not a technology stock—which could also “contaminate” our analysis. Given the facts above we decided to remove all three July observaions as outliers.

Next, we proceed with a dynamic forensic analysis of the Galleon Technology fund’s returns similar to the one performed in our previous post using MPI Stylus and the DSA engine. The results of this analysis are presented in an exposure chart below.1 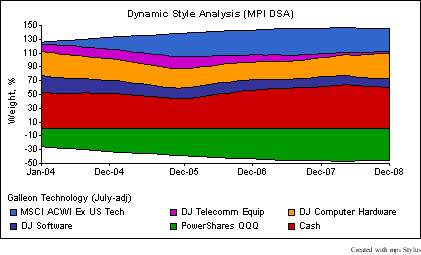 We note quite stable long exposure to several Dow Jones technology sectors. The exposure to foreign technology companies is represented by the MSCI All Country ex. US Tech index, indicating positions in ADRs, foreign stocks, or simply sensitivity to foreign markets through investing in U.S. stocks. Short exposure to PowerShares QQQ ETF is supported by the funds SEC filings according to which the fund maintained at times a significant position in QQQ put options. Both the cash exposure (about 60%, an indication of net 40% market exposure) and the size of the short position (30-40%) are similar to our earlier results. At the same time, these results are slightly different from the ones in the previous post, which is expected given that we removed three very large outliers.

It should be noted that because of the removal of outliers the statistical quality of the analysis improved significantly. The R-squared statistic determining the quality of fit is 89% and the Predicted R-squared, MPIs proprietary cross-validation statistic, is 79%. Such a high quality regression is more typical for a large, diversified mutual fund. The quality of fit is also illustrated in the performance chart below where an exposure-weighted portfolio made of factor indexes (called a”Style” or “Tracking” portfolio) closely tracks the fund’s actual performance in-sample (“Total”). 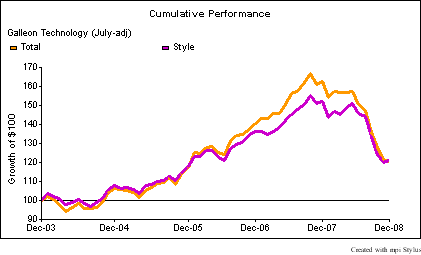 Note that the tracking is exceptionally good through the middle of 2006 where the fund and the tracking portfolio lines begin to deviate slightly despite the removal of outliers. Nevertheless, both the pattern of performance and its magnitude are captured very well throughout the entire five-year history.

While the results of this analysis are very intriguing and somewhat unexpected, the study itself carries very important lessons for investors. First, it shows that analysis of hedge fund returns is a delicate, iterative process requiring careful examination of residuals. If outliers cannot be explained by any available portfolio information they could warrant removal or winzorisation. More importantly, removal of several large “alpha”-outliers allowed us to show that in the remaining periods this quintessential high-turnover arbitrageur behaved more like a diversified mutual fund, with returns mimicked by a few long-term directional bets. And while massive computer-generated trading of Renaissance RIEF resulted in such an immediately apparent pattern, in the case of Galleon, the long-term directional pattern became visible only after identification and removal of several exceptional returns.