Galleon Puzzle: Can You Spot Insider Trading – Without Wiretapping?

The pattern in alpha is as important as its magnitude… Daniel Li Michael Markov In the recent insider trading scandal involving the founder of Galleon Group, Raj Rajaratnam, the government used wiretaps to secretly record his phone conversations and those of his alleged accomplices. In the complaint, government prosecutors present an insider trading case against […]

The pattern in alpha is as important as its magnitude…

In the recent insider trading scandal involving the founder of Galleon Group, Raj Rajaratnam, the government used wiretaps to secretly record his phone conversations and those of his alleged accomplices. In the complaint, government prosecutors present an insider trading case against Rajaratnam and several other executives for illegally profiting from trading stocks and options of Hilton, Google, Akamai and others.

The full text of the SEC complaint against Galleon Group and Raj Rajaratnam reads like a detective story.

There is little doubt that wiretapping is a highly effective investigative tool, but we decided to try some less intrusive methods. With $20M in profits allegedly pocketed in the scheme, we thought that there might be a possibility that the effect of these transactions could show up in Galleon’s hedge fund returns.

As a first step, we take a closer look at the actual numbers in the complaint. Below are the facts of the alleged profit from trading in 2007-2008. The rest of trading (e.g., AMD) hasn’t produced meaningful profit.

The October 20th article in The New York Times puts the current assets of the Galleon Technology Fund at $350M. Assuming that the technology fund lost about 50-60% in assets over the past two years, and given the profits shown in the trades above, one should observe spikes of about 1-2% per month over the fund’s systematic, market driven return. 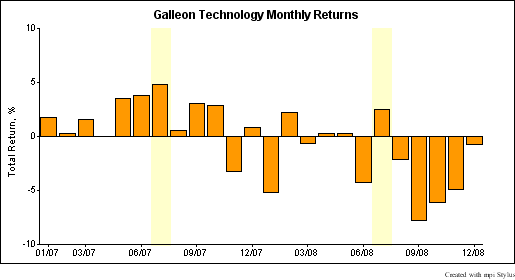 One can observe a 5% return in July 2007 and 2% in July 2008 but there’s no conclusive pattern of anything questionable going on during these periods. Essentially, the pattern of the fund’s monthly returns seems random.

The next obvious step would be to distill or filter out systematic market or strategy-driven return. Once that is done, the remainder would more likely reflect security selection picks. A reasonable choice for such a procedure would be to subtract the monthly returns of an appropriate benchmark from the monthly returns of the Galleon Technology fund. In the chart below we show the return differential between the fund and the CISDM Technology Index (representing average returns of hedge funds in the Technology category). The results are striking:

the only two periods when the Technology fund significantly outperformed the index are the two months mentioned in the complaint. 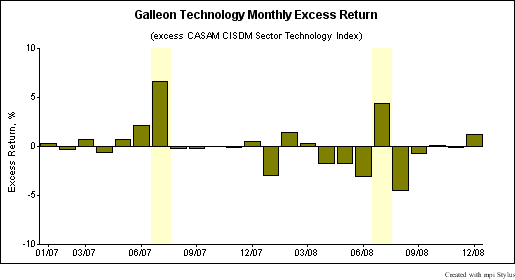 Of course, the magnitude of excess performance spikes is 2-3 times higher than what we expected to see and the results are completely dependent on the choice of index. Still, this qualifies as a good initial sanity check.

However, what if a fund had an obscure strategy and a reasonable benchmark wasn’t easily available? In such a case, a forensic analysis of the hedge fund returns could provide an answer. Using MPI Stylus Pro and its Dynamic Style Analysis model (“DSA”) engine we attempted to reverse-engineer the Galleon Technology fund’s returns.1  After an exhaustive search of thousands of potential combinations of factors and sector indices, the model selected only a handful of relevant factors that best mimic the return behavior of the fund over a two-year period from 2007-2008. The results of this analysis are presented in exposure chart below. Note that this chart does not show actual holdings, but allocations to different factors that best explain the returns of the fund. 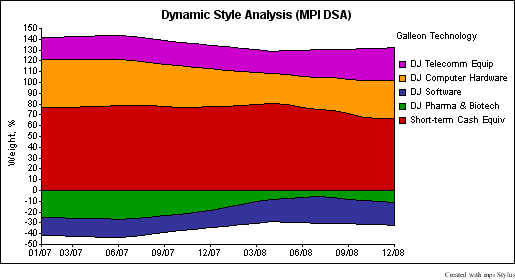 The apparent exposure to the Tech and Biotech Dow Jones sector indices, as well as the amount of leverage determined by MPI’s DSA model, are supported by the scant information about the fund’s strategy. It is widely known that the fund made long and short bets on software and hardware companies and maintained a moderate short position of 30-40%. The latter is confirmed by our analysis showing average negative exposure of about 40%. The credibility of the above analysis is also supported by MPI’s proprietary cross-validation statistics. The cash position of roughly 70% could indicate either hedging or margin position. In more generic terms it tells us that the fund had about 30% net long exposure.

Note that the factor exposures are exceptionally stable and an exposure-weighted portfolio made of these indexes (typically called a Style or Tracking Portfolio) closely tracks the fund’s actual performance in-sample as shown in the cumulative growth chart below. 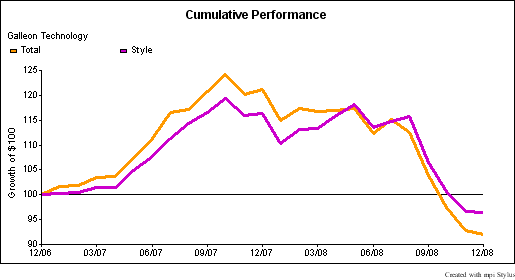 It should be noted that even though the fund’s strategy was primarily short-term arbitrage, a significant portion of its returns could be explained by directional sector bets and easily replicated with a handful of ETFs if anyone wanted to.

Finally, we compute the return differential between the fund and its dynamic in-sample tracking portfolio (Style). These returns are shown in the chart below and are called Selection returns as they could be attributed to non-systematic factors such as skill, luck or… insider trading. 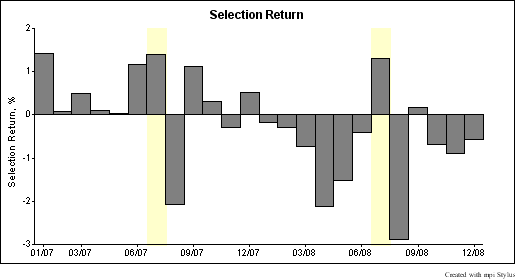 We readily observe that both July’07 and July’08 returns are outliers on the positive side. Their magnitude is in the range of what one would expect to see based on the information presented in the complaint. Interestingly, if these two months are taken out of consideration, our analysis shows that the fund manager had unimpressive stock selection results in 2008. Obviously, not every spike in selection return is a suspect of insider trading and the prosecution is yet to prove their case. At the same time, this case adds another important dimension to routine analysis of a portfolio manager’s selection skill: what if it’s neither luck nor skill but something else? An analysis like this one helps investors to frame their questions and precisely position them in time.

What was presented in this quick analysis of a suspect fund obviously cannot be used as evidence in court. Clearly, wiretapping as a prosecutor’s tool wins here hands down. But, for investors with no access to their investments’ positions (forget about wiretapping!) and struggling to reconcile their funds’ performance with common sense and market moves (Performance is too good to be true? Why are the returns so smooth? Why the fund is up when everyone else is down? etc.) a quantitative forensic analysis remains the only viable option. Investors should be and can be smarter than wiretaps.