Michael Markov and Kushal Kshirsagar In our earlier post (referenced in a story from Jeff Sommer of The New York Times) we performed an analysis of the Laudus Rosenberg US Large Cap mutual fund (sub-advised by AXA Rosenberg) that indicated a significant change in the fund’s risk profile occurred as early as 2008. Our study […]

In our earlier post (referenced in a story from Jeff Sommer of The New York Times) we performed an analysis of the Laudus Rosenberg US Large Cap mutual fund (sub-advised by AXA Rosenberg) that indicated a significant change in the fund’s risk profile occurred as early as 2008. Our study showed a substantial increase in the daily tracking error of the fund to its benchmark – the Russell 1000 Index. The tracking error reached its peak in June 2009 and was several times higher than many of its quant Large Cap Core peers. So there was a symptom that could have alerted risk managers or investors to potential problems. Note that this symptom became apparent only on shorter-horizon (daily temperature charts) rather than two-year averages commonly used by many practitioners.

We then performed some quick diagnostics to understand the nature of the problem and to eliminate false alarms such as data issues or a specific stock bet. We found none of those but the fund’s daily beta was on a path of steep descent in 2009, another worrying symptom but no diagnosis yet.

To get a better understanding of the nature of the problem we will perform a full multi-factor, “metabolic panel”, of the fund’s daily returns-bases style analysis (RBSA). When performed with the right tools that can filter the daily noise, such an analysis could provide key insights and potential answers to specific questions. Through this daily returns-based analysis, we seek to learn more about attribution of the fund’s gains or losses: what bets were made, when were they made and for how long – and with what impact on both performance and risk? It is important to remember that this analysis does not look at actual holdings. Instead, our analysis seeks to understand a fund’s return behavior by comparing its daily returns to those of various passive indices.

Using daily fund NAVs we performed returns-based style analysis in MPI’s Stylus Pro system of Laudus Rosenberg US Large Cap funds against the S&P 500 sectors. The results of the analysis are presented in the charts below where color bands represent portfolio exposures to S&P sectors and cash (exposure to US Treasury bills).

The change in sector exposure at the end of 2008 is immediately apparent with some significant shifts both before and after. Exposure to Energy, Health Care and Consumer Staples changed in a profound way. The quality of this analysis is very high with R-squared being in the 99% range. Again, please note that the analysis was performed using only fund’s NAV and without use of any holdings information and such a result may not directly imply that the fund indeed had such sector position at the time. The best way to further identify possible bets is to plot the fund’s exposures over the S&P 500 index.

In the chart, the bands above the zero line denote sectors where the fund’s sector exposures are greater than those of the S&P 500 index and the ones lower than zero indicate sector exposures less than the index. In 2009, fund exposure differentials peaked in the 2nd QTR and then started slowly normalizing by the end of the year. Our returns-based analysis shows that the fund may have been significantly overexposed to Health Care (the lowest beta sector) and underexposed to some of the highest beta sectors such as Financials. The increased cash position (green color) may indicate that the fund selected more defensive (i.e. lower beta) stocks within sectors. All of these factors could have contributed to the fund having very low beta behavior in 2009, as identified in our previous post.

Incidentally, this period was characterized by what many referred to as a “dash for trash”. Lower quality stocks that were priced for an Armageddon scenario rebounded strongly when the cycle turned in the second quarter of 2009. Consequently, higher quality names, in general, underperformed these lower quality stocks resulting in the underperformance of many fundamental (both quantitative and non-quantitative) alpha strategies. The impact of this phenomenon on a fund’s performance depended on the extent to which these alpha bets were reined in by risk controls.

And finally, let’s see what RBSA can tell us about fund liquidation. On May 2, the board of directors of Charles Schwab made a decision to liquidate four Laudus Rosenberg funds. The funds were immediately closed to new investors and the liquidation was scheduled for July 30th. The fund is still reporting daily NAVs which make it possible to understand how the liquidation is progressing in terms of the fund’s exposure to major sectors. The chart below, showing daily returns-based exposures of the US Large Cap fund , indicates that the fund is currently behaving as though it is about 65% cash with exposure to just a handful of other sectors. 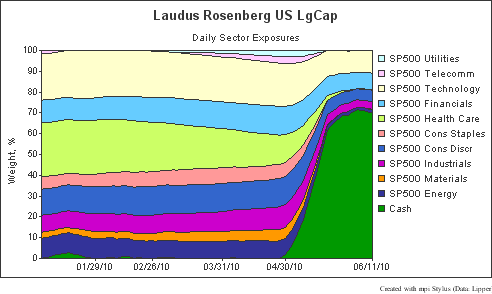 Having such little exposure to the market over the past several weeks clearly boosted the fund’s performance for remaining investors! Again, we would like to make a disclaimer that this analysis is based only on the fund’s NAVs and may not reflect the fund’s actual positions.