We continue to follow Fairholme Fund after posting a detailed attribution analysis of the fund on our blog early in the year. Bruce Berkowitz’ fund handily outperformed S&P 500 this year delivering almost twice the index performance: 28.5% vs. 15.5% for the index through August 24, 2009 (source: Morningstar). Last week, Mr. Berkowitz gave an […]

We continue to follow Fairholme Fund after posting a detailed attribution analysis of the fund on our blog early in the year. Bruce Berkowitz’ fund handily outperformed S&P 500 this year delivering almost twice the index performance: 28.5% vs. 15.5% for the index through August 24, 2009 (source: Morningstar). Last week, Mr. Berkowitz gave an interview to Steve Forbes with the transcript available here:
http://www.forbes.com/2009/08/21/berkowitz-fairholme-pfizer-intelligent-investing-buffett.html

Unfortunately, the famed manager didn’t provide any hint on where the fund might be heading these days. When asked about the fund’s current cash position, Mr. Berkowitz referred to the data in the semi-annual report showing 17% as of the end of May. We did a quick analysis of the fund’s daily NAVs with a hope that it could shed some light on the most recent fund’s moves. For example, it would be interesting to see if the cash remained steady over the past several months or whether there’s any significant change in the health care sector weightâ€”the most sizeable in the Fariholme. We used returns-bases style analysis and recent daily fund NAVs to deduce more recent portfolio information. It is important to note, however, that similar to fund’s beta this information is provided in terms â€œexposuresâ€ rather than holdings, i.e., telling us how the fund behaves rather what it holds. ((for detailed explanation of returns-based analysis please refer to our website’s research section or to the previous post on Fairholme in January))

We did analysis in MPI Stylus using S&P 500 equal-weighted sector indices to measure the exposure to US economic sectors. We also added Barclay’s High Yield Bond index and MSCI EAFE Index because the fund had a position in high yield bonds and foreign equities. We show the result of the analysis in Exposure Chart below. 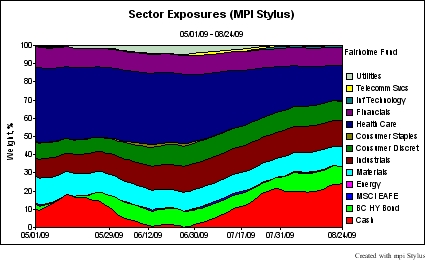 Note that Cash+Bond exposure (red and green) in May is about 20% of the portfolio and is close to the number provided in the semi-annual report. Other sectors are very much in line with the report with the largest exposure to Health Care. Note that the only information used for this analysis were Fariholme’s daily NAVs through Monday, August 24.

The dynamics of exposures in the last month are of most interest. Cash+Bond exposure is increasing and is at the 30% level, the highest so far this year. The Health Care sector exposure is diminishing and has fallen to 20% which is more visible from the chart below. The rest of the sector exposures remain relatively steady. 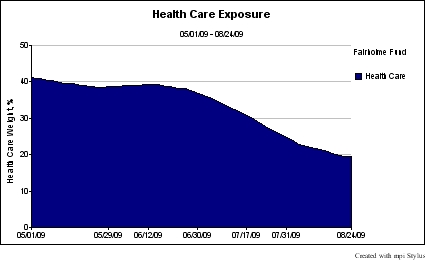 In order to find funds with a similar tendency, we analyzed 100 largest equity funds (Source of data: Lipper/Reuters) and plotted our results in the two scatter diagrams below. One chart shows the change in Cash+Bond exposure since the end of June, the other chart provides similar information for Health Care sector. X-axis shows June number, Y-axis – the latest August exposure. Each point represents a fund in the group. The farther the point is from the diagonal, the more dramatic change has occurred over the 2-month period. Fairholme appears to be the only fund that significantly decreased Health Care exposure and increased cash exposure! Most funds don’t change at all or move in the opposite direction. 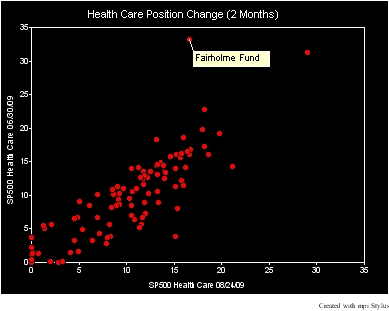 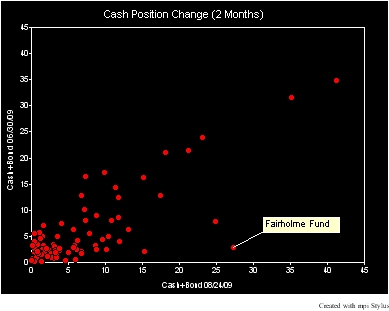 We would like to emphasize again that the exposure information above may not be equal to what positions the fund holds as it is not using holdings information. For example, in one of the charts we show Health Care exposure at about 38% at the end of May, while it was reported at 30% (incl. Pharmaceutical). At the same time, similar to market beta number, it shows what kind of performance is to be expected from the fund given performance of various market sectors.