The month of August was almost universally tough for financial markets. Equity, Commodity and Fixed income markets fell, dragging most managers with them. Intermediate-Term Bond Funds, one of Morningstar’s largest categories, were not immune to this turmoil, with 221 of 235 funds posting losses. The median loss for the category was -0.25%, with the Barclays US. Aggregate Bond […]

The month of August was almost universally tough for financial markets. Equity, Commodity and Fixed income markets fell, dragging most managers with them. Intermediate-Term Bond Funds, one of Morningstar’s largest categories, were not immune to this turmoil, with 221 of 235 funds posting losses. The median loss for the category was -0.25%, with the Barclays US. Aggregate Bond Index, the index most commonly used as a benchmark for the category, losing -0.08%.

We were curious about what exposures may have separated the few that managed to eke out a (narrow) gain from the funds that fell the most amidst the market turmoil.

To begin our investigation, we conducted a returns-based style analysis on the top 10 (averaging a gain of .14%) and bottom 10 performing funds (averaging a loss of -1.20%) in the category for August to assess the market factors that best explain the groups’ averaged returns in the month in an attempt to find common themes.1 The below chart shows the average exposures of the top and bottom 10 funds over the three month period through the end of August2 to relevant fixed income factors.3 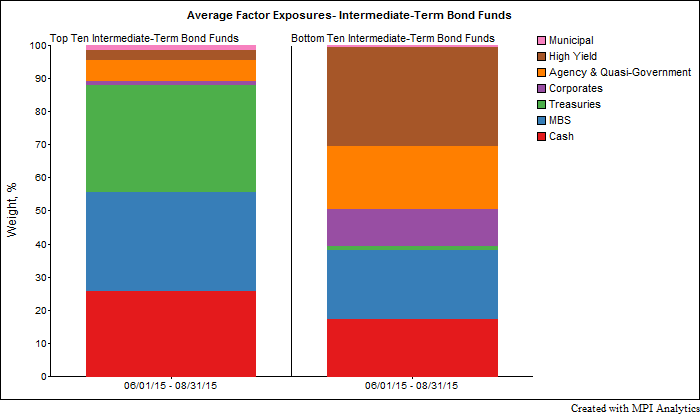 We note the top performers generally behaved as if they had significant conservative exposures, represented by U.S. Treasuries and mortgages, which both gained for the month, as well as relatively higher cash levels. Mortgages have benefited from continued pressure on commodity prices. Bottom performers behaved as if they were more exposed to credit – investment grade corporates as well as high yield – in addition to a sizable exposure to agency debt, sectors that all fell in August. The funds also had relatively lower cash levels4. Fixed income sector returns for August are charted below. 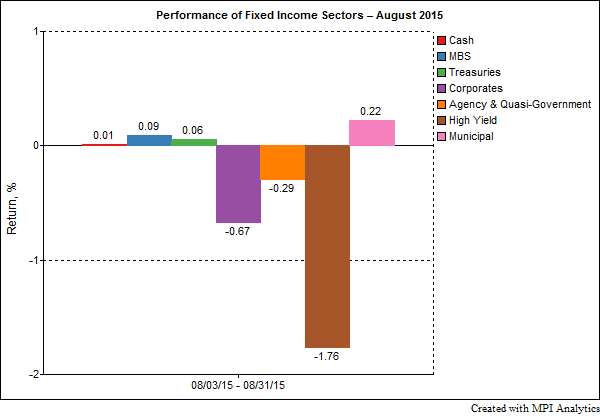 To understand how the aggregate exposures of the top and bottom funds varied from the benchmark, the below chart visualizes excess exposure levels for each group against the Barclays U.S. Aggregate Bond Index for August. 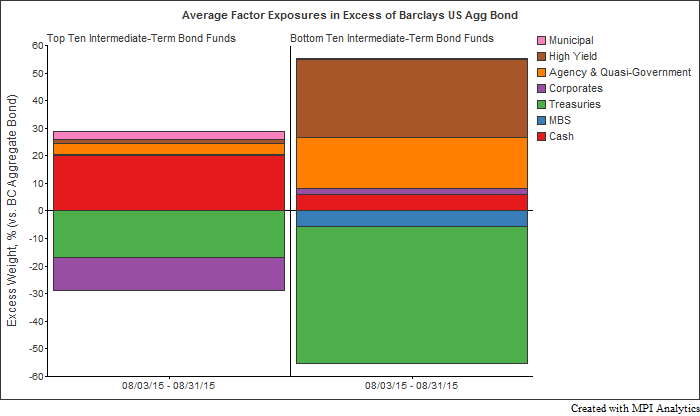 As we see, the exposures of the top performing funds varied from the benchmark by nearly half as much as those of the bottom funds. While funds in the intermediate-term bond category are considered “core” and typically have similar duration and a common benchmark, we see that variation between sectors (factor exposures), risks (e.g. credit risk) and latitude from the benchmark can vary significantly.

Indeed, we see that style return, the portion of return generated by factor exposures (represented by the green bar), of the bottom 10 managers was the biggest detractor to performance in August. Securities selection5 (blue bar) was a marginally greater determinant of performance than style for the top funds. 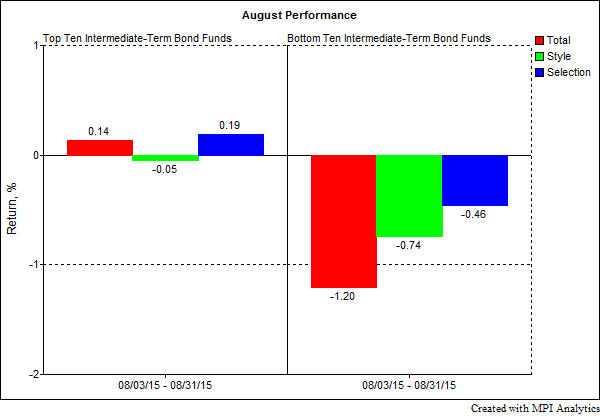 Looking at merely one month in isolation – no matter how turbulent – is certainly not recommended, however. Of August’s top performers, 46 finished within the 95th percentile in the 36 months leading to August and 77 of the funds are in the top half of the category over that period.

The highest ranking fund over the recent 3-year period and 5-year period, finishing in the 97th percentile and top percentile, respectively, was DoubleLine Total Return Bond Fund; the fastest growing mutual fund in history finished 5th in the category for August. From a style standpoint, and aside from the industry-leading returns posted by its manager Jeffrey Gundlach, the fund’s performance in August is not surprising as it “invests primarily in mortgage-backed securities” according to Reuters.

With mortgages posting positive returns for the month, it is logical that we see four funds with “mortgage” or “securitized” in their names – JPMorgan Mortgage-Backed Securities, Morgan Stanley Mortgage Securities and Federated Mortgage Strategy, Loomis Sayles Securitized Asset – amongst the top 10.

August’s turbulence favored rates and quality, reflected in the collective exposures of the top intermediate-term bond fund managers. Now in September, managers’ portfolios stand to be impacted by the Fed’s non-decision and continued global growth concerns, as well as a host of other variables that can and may arise, as always. In times of volatility, investors would do well to remain apprised of the modeled exposures within their core (diversified) fixed income allocations – and how those exposures impact the entire portfolio – while remaining mindful of their manager’s longer-term track record, investment process and market thesis.