Chart of the Week: QE3’s Big Winners – Positioned for the Printing Press

While attention has focused on bond fund managers who benefited from the Fed’s much anticipated announcement of the next phase of Quantitative Easing (QE3) on Thursday September 13th, what happened with equity fund managers? Hindsight may be 20/20, but it is no secret that equity markets have responded ebulliently to past announcements; after all, money […] 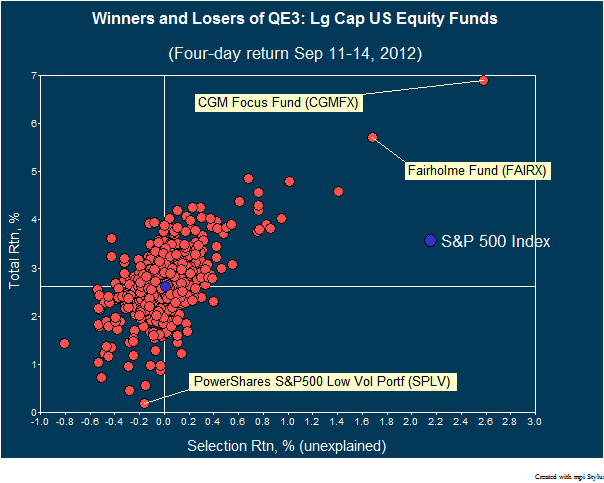 While attention has focused on bond fund managers who benefited from the Fed’s much anticipated announcement of the next phase of Quantitative Easing (QE3) on Thursday September 13th, what happened with equity fund managers?

Hindsight may be 20/20, but it is no secret that equity markets have responded ebulliently to past announcements; after all, money is sloshing around and must go somewhere (and likely towards riskier assets given QE’s impact on yield).

Despite whispers – especially via The Wall Street Journal’s Fed mouthpiece John Hilsenrath – becoming increasingly frequent over the summer, it turned out that QE3 wasn’t priced in. Over a four day period (Tuesday 9.11.12 – Friday 9.14.12) the market jumped, with the S&P rising 2.61%.

Using daily NAV data filtered through Prospector, MPI’s market surveillance application, we found that Ken Heebner’s much tested CGM Focus (CGMFX) had the highest return over the four day period of all 735 mutual funds in Lipper’s Large and Multi-Cap categories, posting a four day return of  6.9%  (164% greater than the benchmark). Another household name, Bruce Berkowitz’s Fairholme Fund (FAIRX), came in second with a gain of 5.71%.

What, you may be wondering, were the drivers of this prodigious outperformance? In the above chart, the x-axis measures Selection Return, the portion of the outperformance related to securities selection. Selection is unexplained by long-only perceived market factor exposures picked up by our patented model, Dynamic Style Analysis (DSA).1 Both managers look to have made some savvy decisions for a scenario in which the markets would jump broadly.2

To test this further, we looked at beta (based on trailing 3-month daily data) to the S&P 500 of the fund universe. Interestingly, both Heebner and (particularly) Berkowitz do not have the highest beta of the bunch. There are plenty of funds with the same or higher beta, so beta is not the explanation the funds’ returns being 164% and 119% better than the market, respectively.

While both managers are known for their high conviction, highly concentrated portfolios (CGMFX recently reported 22 holdings, 70% in top 10) and significant turnover, these charts suggest the funds were right in the QE3 sweetspot. FAIRX’s real estate sector exposures (Dow Jones U.S. Real Estate Investment & Services Index rose 9.9% in the period) likely helped its cause; additionally, our factor analysis shows FAIRX exposure to Real Estate rising since their last filings at the end of Q2. For Heebner, his reported negative exposure to cash and bullish commentary of late would suggest his market exposure and implied leverage (which our model also shows to have increased from last filings were made; see related footnote) put the wind at CGMFX’s back.

Rest assured, next time Mr. Bernanke fires up the press, we’ll be watching (as well as turning an eye to the past to see if there are any patterns in manager behavior around landmark monetary policy decisions of the past years). 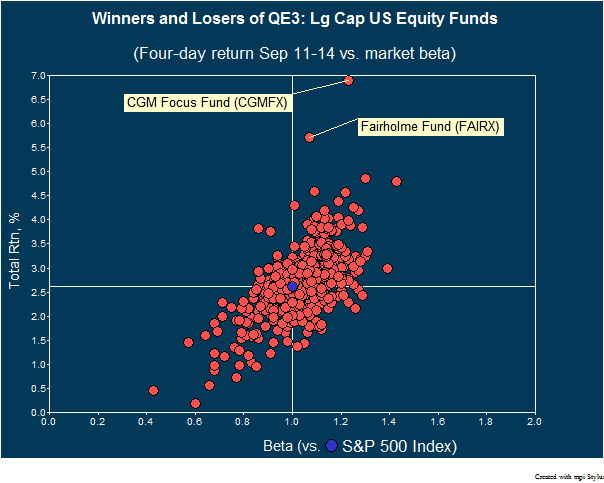