Salient Points: Over the past 12 months, GMO Quality emerged as the best ‘timer’ or sector allocator of any fund in the large- and multi-cap U.S. equity universe, when weighed against the S&P 500. Ironically, the fund is known for its stock selection. Its outperformance is attributable to consistent, steady exposure to certain in-favor sectors, […]

When examining a great performing fund’s excess return vs. a benchmark, it is important to look at the fund’s performance attribution in terms of timing and selection. Timing is related entirely to the dynamic style, or sector allocation, bets vs. the benchmark. Selection, on the other hand, pertains to the performance of individual securities not explained by sector factors.

From a timing, or allocation, viewpoint, GMO Quality VI (GQLOX) is worth examination. Our analysis1 shows that over the past one year period (since July 20, 2011) GMO Quality holds the distinction of being the top timer amongst the universe of more than 700 of the largest large- and multi-cap U.S. equity funds in the Lipper database.

It’s worth noting that fewer than 10% of funds in this universe achieved positive excess timing return vs the benchmark (in this case the S&P 500), or to put it another way, few funds achieved a style that was in favor over the past 12 months. And many good “timers” were penalized by poor security bets (i.e. negative selection – bottom-right quadrant in the above chart). A small percentage of funds (and only a dozen funds above $1 billion) had both positive timing and selection (i.e. the top-right quadrant).

The case of GMO Quality is even more interesting because the fund is known more as a stock selector than a sector allocator.2 The fund reportedly follows a distinctive strategy that aims to invest in ‘quality’ companies with wide economic moats (i.e. low debt, steady high profits and sustainable competitive advantage) and lower risk.

While economic moat investing spans sectors, during periods it can favor certain sectors. According to filings, GMO Quality has long found moats in companies across the consumer staples, technology and healthcare sectors. Indeed, the fund has reported large longtime positions in the likes of Johnson & Johnson, Philip Morris, Coca Cola and Microsoft. In support of this strategy, according to the Wall Street Journal, a recent paper by the fund’s managers “shows that since 1966, the highest-return companies in a given year tended to retain that status five years later.” 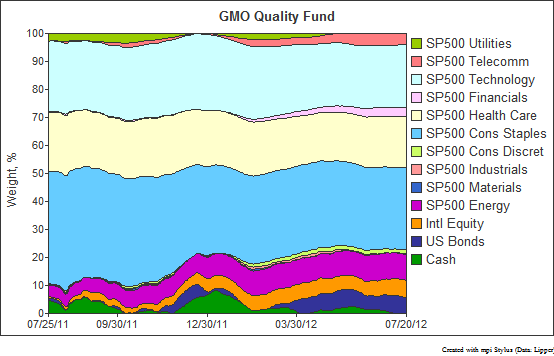 So, GMO’s outperformance over this period can be predominantly attributed to allocation consistency and the fact that its exposures were in favor, rather than either actively timing the market – weaving into the market and certain sectors at lows and out at the highs over the past year’s volatile trading range – or specific stock picks within sectors (selection).