An October 15th WSJ article, “When ‘Focused’ Funds Falter”, finds many prominent stock-picker funds among some of the worst performing this year. Of such funds, Fairholme Fund (-27.6% YTD through Oct 13), a subject of one of our previous blog posts, is one of the most notable – along with Bill Miller’s Legg Mason Opportunity […]

An October 15th WSJ article, “When ‘Focused’ Funds Falter”, finds many prominent stock-picker funds among some of the worst performing this year. Of such funds, Fairholme Fund (-27.6% YTD through Oct 13), a subject of one of our previous blog posts, is one of the most notable – along with Bill Miller’s Legg Mason Opportunity (-34.7%) and CGM Focus (-22.2%). All funds have suffered significant redemptions this year.

As highlighted in our Fairholme analysis, concentrated stock bets often lead to concentrated sector bets and both contribute to the fund’s performance. It’s easy to run for the exit after experiencing losses like this but, as always, one should first do a quantitative analysis to understand where the losses are coming from. If one finds significant sector overweighting in an otherwise solid fund, investors may consider offsetting such sector bets with other investments that will help the overall portfolio achieve sector allocations that are close to the benchmark. Thus, if one believes that the manager’s stock selection ability is still there, the heavy exposure to financials in Fairholme could be offset by adding a fund with negligible financials exposure or eliminated by hedging the exposure with a short-financials ETF such as ProShares SEF.

There also exists a “stock-picker fund” that tasks itself with performing such risk management for investors. American Funds Growth Fund of America (GFA) is a multi-strategy domestic equity fund run by several management teams each implementing its own unique investment strategy. Their portfolios are then blended into the fund which is diversified by design. American Funds indicates that, since the product’s launch in 1973, it has outperformed the S&P by 3% a year. The combination of risk management, stock selection ability and exceptional long-term performance previously attracted huge AUM and GFA consistently maintained the status of the largest US equity fund for over six years. Additionally, as of late last year, it was the most popular fund in the enormous U.S. 401k market according to a study done by Brightscope in the October 3rd, 2010 issue of Investment News.

As of September 2011, however, the fund has lost its spot as the largest mutual fund with deep withdrawals. Morningstar indicates that the fund now has $137 billion in assets. In the face of an industry wide flow to passive products, a recent Bloomberg article questions the ability of such a large, focused stock selection fund to outperform in the current market environment. The previously cited Investment News article also indicates that many advisors feel that the fund’s size prevents it from being nimble enough to replicate its past performance.

Given the enormous interest in this fund, we felt compelled to provide some quick insights into the fund’s recent performance since returns-based style analysis (RBSA) is perfectly suited for such a task (as it does not require daily positions on the hundreds of stocks in the portfolio). We performed our analysis with MPI’s Stylus Pro software using Class A shares (AGTHX) 2011 daily NAVs through Oct 14th from Lipper/ThomsonReuters. Note the fund’s losses in Aug-Sep in the chart below, albeit partially offset by Oct gains thus far. It’s not yet clear, though, what portion is due to systematic market conditions. 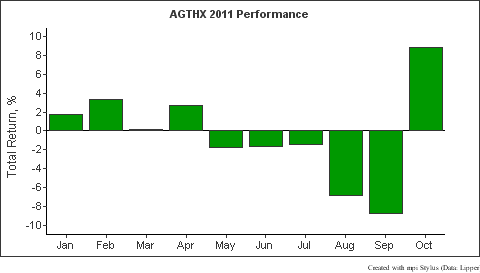 The first step is to look at the performance relative to S&P 500 Index. The picture is a bit sharper as both months show significant underperformance vs. the index. 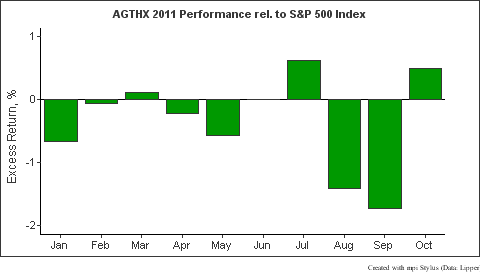 We then performed RBSA using daily returns of the S&P 500 sectors and MSCI AC World ex US Index to better assess the fund’s daily exposures. As always, please note that we are not determining what the actual holdings were but, using only return streams, indentifying the mix of indices that best replicates the performance of the actual fund. A high level of diversification (the fund held over 400 positions per latest SEC filing) results in the analysis having a very high R-squared of 99.5%, which makes such an analysis very credible. Note that the exposures are very stable in the chart below – in line with the fund’s low turnover. Some notable observations: 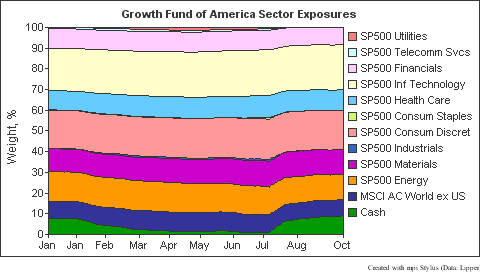 We would like to again stress that the results of style analysis are not equivalent to actual fund holdings, although they could be very close. For example, AGTHX has 16% in foreign stock holdings as of June according to the company’s website while our analysis shows exposure to MSCI AC World x US index at around 10%. The differences could be attributed, for instance, to ADRs spread between S&P500 sectors or foreign stocks that behave more like U.S. equity. One should keep in mind that exposures derived through RBSA could prove to be more valuable than holdings information as they represent how fund positions are being viewed by market participants. And while the list of holdings represents simply a snapshot of accounting data, exposures mimicking the funds behavior represent market’s assessment of these holdings: it could happen that a fund’s positions behave closer to sectors that are different than the sectors they’re being assigned to.

One could also view the allocations above as a replication portfolio that mimics the fund’s performance. We call the performance of such a portfolio, a mix of passive indices, a fund’s Style Return, which could be achieved by simply investing in sector indices such as ETFs. In RBSA, the difference between the fund’s return and its Style Return is often called Selection Return, which could be viewed as a proxy for the fund’s stock selection ability. It is important to note that the Selection Return derived from RBSA is purely quantitative and may be due to other factors that are not associated with stock picking – especially in low R-squared cases. A high level of R-squared, by definition, leaves little room for variability in selection, which is confirmed in the figure below. Selection represents a fraction of the total return volatility – which was noted in the Bloomberg article. 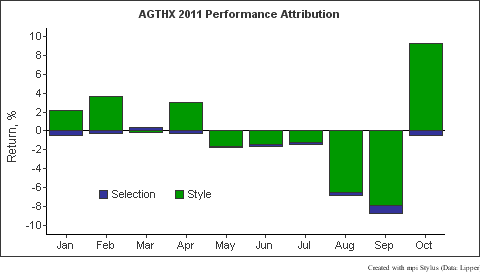 We still do not have a good explanation for the Aug-Sep underperformance vs. S&P 500, however, and it does not seem like selection accounts for the gap. At this point, it is worth looking at various sector and style bets of the fund vs. the benchmark. We present such an analysis in the figure below where overexposure to certain sectors is shown above X-axis while under-exposure is shown below the X-axis. The fund behaves as if it is overexposed to Consumer Discretionary, Materials and Foreign stocks while being under-exposed to Industrials and Consumer Staples. Also, note the increased cash exposure not present in the index.

Next, we quantify the monthly impact of sector bets on the fund’s performance relative to the benchmark. Timing Return – driven by differences in sector exposures between the fund and the benchmark – is part of the total excess return vs. the benchmark. Please note that the Timing Return in our RBSA does not necessarily insinuate swings in allocations or true “market timing” (AGTHX has been a relatively style consistent fund), it is simply showing the performance attributed to differences in exposure between the Style Return and Benchmark Return. From this returns-based analysis, it appears that both August and September returns were primarily driven by such exposure differentials. 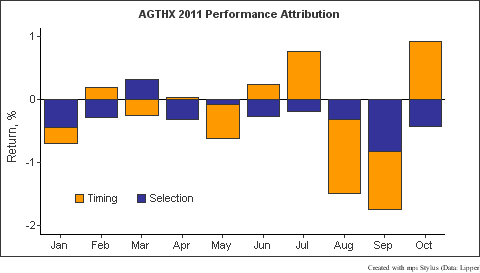 Also, overall monthly volatility of the fund’s Timing Return this year is much higher than that of the Selection Return. In the current market environment, sector bets should be examined more closely than individual stock bets as the impact of the over- and under-exposure of sectors can be quantified. In the figure below we show both positive and negative contributions to AGTHX performance from the exposure differentials observed in our analysis of the fund’s NAVs. It is easy to see that the positive and negative Aug-Sep sector contributions almost cancel each other out, with the notable exception of the foreign stock contribution (including Emerging Markets), Consumer and, especially, Materials sector. Indeed, the fund’s underperformance during these months appears to be largely driven by its exposure to these sectors. 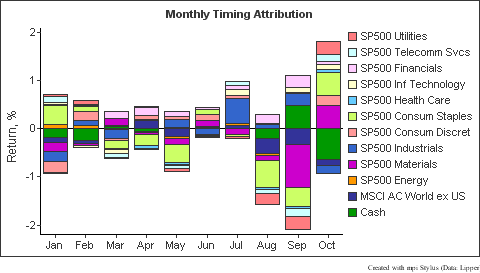 As always, our analysis is purely based on returns and does not reflect actual holdings, but it does provide meaningful insight for investors and advisors. The results of such a short-term analysis do not necessarily lead one to judge AGTHX conclusively though. Certainly, the fund has enjoyed a pretty amazing run over the past 39 years. However, those looking for evidence that the fund’s large size has hurt its ability to pick stocks will not find anything here to dismiss that suspicion. On the contrary, most of the fund’s recent returns can be attributed to its overall asset allocation and sector exposures in our returns-based analysis. Indeed, the fund has underperformed its “Style” or tracking portfolio (the mix of passive indices that best explain its performance) over this period. Much of the fund’s recent sector exposures appear to have contributed to its underperformance against the S&P 500 and returns-based Selection Return has been generally negative over this short period. The better take-away might be that the S&P 500 is not really the most appropriate benchmark to judge AGTHX’s performance. It is difficult to assess the value of a growth-oriented equity product with overseas exposure against the S&P 500 – which is why many prefer to use a blended “style” benchmark to determine a manager’s value. Growth Fund of America has been a very stable fund from a returns-based style perspective – perfect for long-term, strategic investors like 401k participants seeking predictability and, ideally, some alpha. One might conclude from this very short-term analysis, however, that the real value here is not as a “stock picking”, alpha-focused fund but as a consistent active component of a strategic portfolio. Viewed from that perspective though, the recent flows to ETFs and other passive investments become pretty understandable.